[BOOK REVIEW] When a Texan Gambles by Jodi Thomas 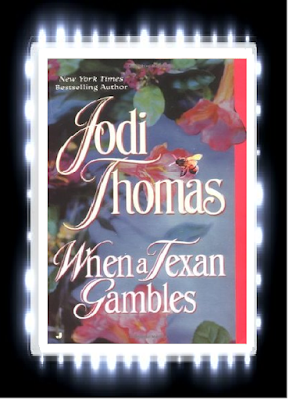 Title:  When a Texan Gambles

I have been currently reading Jodi Thomas's “Wife Lottery” series and after I have just finished the first book of the series, “The Texan's Wager,” which starred Bailee Moore and Carter McKoy, I finally got the chance to read the second book of the series, “When a Texan Gambles.” “When a Texan Gambles” stars Sarah Andrews and Sam Gatlin and boy, do they have wild adventures throughout this book! Expect a whole lot of drama, adventure and romance in this exciting sequel to “The Texan's Wager!”

After Sarah Andrews confessed to the murder of Zeb Whitaker along with her friends Bailee and Lacy, she was auctioned off in a “Wife Lottery” and ends up with a man named Sam Gatlin. Things were not going well for Sarah until she realized that Sam was stabbed in the back with a knife! Now that Sarah has taken care of Sam's wounds, she will soon discover that she is probably married to the most dangerous man the west have ever known!

Wow! I think this had to be the most action-packed story out of the entire “Wife Lottery” series so far! Jodi Thomas has done an awesome job at providing action throughout this novel, which just had me sitting on the edge of my seat every time I read about Sam and Sarah's escapades in escaping from various crooks who are after Sam's neck! What I really loved about this book were the characters themselves and my favorite characters in this book were Sam Gatlin and Sarah Andrews! I will admit that I really adored Sarah's spunk and kindness towards others as she is an innocent yet kind-hearted woman and I loved the way that she is willing to help anyone in their time of need, which includes helping various families reunite with each other. I also loved the little arguments that Sarah has with Sam because they were so cute and they always seem to make up at the end. Now, I am saving the best character for last and that is the sexiest and bravest cowboy to ever walk the planet, Sam Gatlin! Sam Gatlin is probably the most amazing romance heroes ever created because he is one-hundred percent all muscle on the outside and has a huge heart on the inside and that is what I like about my romance heroes!   Now, this book does not just have adventure, it also has hot and sizzling romantic scenes! The sexual moments between Sarah and Sam were just so steamy that I was literally fanning myself every time I read these scenes between Sarah and Sam!

The reason why I gave this book a four star rating is because I often got a little frustrated with Sarah throughout the book because she does not seem to trust Sam enough and she rarely reciprocates her feelings for Sam. Now, I do understand that she is a little reluctant in loving someone again because of her empty relationship with Mitchell, her first husband, but sometimes I think that Sarah tends to go a little overboard with telling off Sam about showing his love for her and also the fact that Sarah keeps telling Sam about the rules of love sort of makes me a little uncomfortable because I always love seeing how love comes naturally to romance heroes and heroines, rather than base it on a set of rules.

Overall, “When a Texan Gambles” is a great sequel to “The Texan's Wager” that romance fans of Jodi Thomas's works will greatly enjoy. I am definitely looking forward to reading the third book in the series “A Texan's Luck” next!