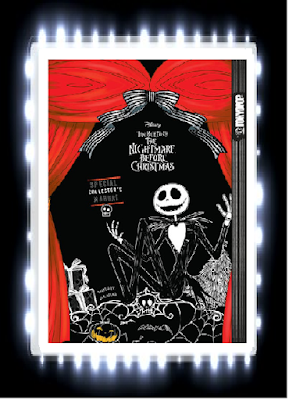 I would like to thank NetGalley, Edelweiss and Tokyopop for providing me a copy of this book in exchange for an honest review.

Now, I will start going into fangirl mode here since I will be talking about one of my most favorite animated movies of all time!   I will admit that when I was little, I was actually terrified of Tim Burton’s classic animated movie “The Nightmare Before Christmas,” due to the scary visuals presented in the film.  But, when I started watching this film way back in high school, I suddenly fell in love with this creepy yet memorable movie and it has become one of my most favorite films to watch during Halloween (next to “Hocus Pocus,” of course)!  So, when both NetGalley and Edelweiss gave me a copy of the manga adaptation of “The Nightmare Before Christmas,” which was adapted by Jun Asuka, I was jumping around with glee since I never would have thought that a manga version of “The Nightmare Before Christmas” would ever be made!

Based off the classic animated film, Jack Skellington is the scariest creature in Halloween Town, but unfortunately, he has started to get tired of doing the same old things every year for Halloween and he goes out into the woods to discover more things to do.  One day, while he was out in the woods, he discovers a door that has a Christmas tree on it and he ends up going through the door and discovering Christmas Town and Santa Claus.  It was then that Jack decided to become Santa Claus that year and deliver some “presents” to all of the girls and boys in the world.  Unfortunately, Sally, the ragdoll that loves him, has a terrible premonition about Jack’s Christmas turning into a disaster and Sally has to stop Jack from becoming Santa Claus and delivering the presents to the kids before it is too late!

The story:  Wow!  I was quite impressed with this story!  “The Nightmare Before Christmas” has always been one of my most favorite animated movies of all time and I was so excited to finally be able to check out the manga version of this movie!  As I come to expect, the manga version of “The Nightmare Before Christmas” was completely faithful to the original movie, from the dialogue to the situations that happened in the film.  I loved revisiting the movie in manga format since it was quite unexpected for me to see this movie in manga form rather than in a regular graphic novel format and it just made this manga so original to read through!  I also loved the fact that this manga focused more on Jack and Sally’s relationship with each other than the movie did and I loved the fact that we get more focus on Sally’s perspective of the whole situation in this manga since I wanted to see more from her character in the movie and this manga did a great job at fleshing out Sally’s character even further.

The reason why I took off half a point from the star rating was because the copy I got seemed a bit incomplete.  It seemed like the bottom half of the pages were cut off a bit and there was a bit of dialogue that I ended up missing because it got cut off at the bottom.  Luckily, I have seen the movie enough times to figure out what is going on and I probably would have given this manga a five-star rating if I had not received an incomplete copy of this manga.