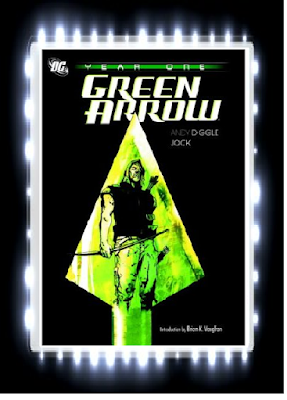 Alright, so I have been reading “Batman” and “Superman” comic books from DC Comics so far, but I have yet to read comic books from other superheroes like “Flash,” “Green Lantern” and “Wonder Woman.” But now I finally got the chance to check out another DC superhero that I have not read about at all and that is “Green Arrow!”  Now, I have been watching the “Arrow” TV series for a while now and I had always wanted to read more about “Green Arrow” as a character.  So, when I heard so many good things about a comic book called “Green Arrow: Year One,” I just had to check it out and man, was I blown away by this awesome comic book!

Oliver Queen was a rich playboy who was always spoiled and seemed to only care about what he wanted rather than what others wanted.  But, when Oliver’s friend Hackett ended up betraying him and throwing him out of the boat to die, Oliver manages to survive by ending up on an abandoned island.  It was there that Oliver starts to realize his true potential in life while slowly becoming the famous GREEN ARROW!

Andy Diggle’s writing: Oh my goodness!  I will be honest here, I have never read any of Andy Diggle’s works on comic books before, so this comic book is not only my first introduction to Green Arrow, but also my first introduction to Andy Diggle’s works and his writing on “Green Arrow: Year One” has definitely blown me away!  I loved the way that Andy Diggle wrote the action sequences as they were truly intense and I was literally on the edge of my seat seeing if Oliver manages to survive against a group of violent and cruel drug lords who are trying to kill Oliver in order to keep their plans a secret.  I also loved the way that Andy Diggle developed Oliver’s character as Oliver started out as a spoiled brat who did not care about anyone but himself.  But when Oliver’s life is in great danger and he sees a group of people on the island being enslaved by the drug lords, it was then that we start seeing Oliver grow as a character and having him realize the true potential inside himself by becoming the hero for the people. I also loved the fact that Oliver was portrayed as being a laid back yet assertive and courageous character, especially during his time on the island and I really felt the growth that Oliver went through on his adventures.  What was interesting to me about this comic book were the similarities with the “Arrow” TV series, as in both this comic book and the TV series had Oliver stranded on an island and trying to survive, while also training to use a bow and arrow which would benefit him GREATLY in the future.

For anyone who does not like language and gory violence in a comic book, this comic book has some language (even though it is not as strong as some comic books I had read over the years) and some violence where some characters are shot with arrows and you can see the blood spurting out as the arrows hit the characters.

Overall, “Green Arrow: Year One” is POSITVELY, ABSOLUTELY and SERIOUSLY one “Green Arrow” comic book you have to check out if you are a huge fan of everyone’s favorite arrow toting superhero and if you want to know the origin story of Oliver Queen!

Posted by Ronyell (a.k.a. Rabbitearsblog) at 8:18 PM No comments: 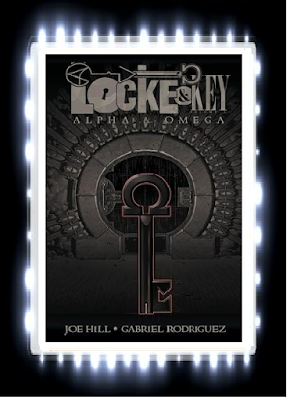 I have been reading Joe Hill’s magnificent “Locke and Key” series for years and now we finally get the ultimate finale for this wonderful series!  I have been wondering for years about how this series was going to end and whether or not I would be impressed with the results.  Well, I have to say that this is one volume that really defines the meaning of “DRAMA BOMB FINALE” and it has exceeded my expectations far more than I expected!

In this volume, Lucas “Dodge” Caravaggio (who is now in Bode Locke’s body due to his own body getting destroyed in the previous volumes) has now obtained the very key he was looking for: the dreaded key that would open THE BLACK DOOR!  Lucas then comes up with a dastardly plan to get most of the high school students to go to the Drowning Cave so he could summon up the demons on the other side of the door to overtake the Locke Kids’ world!

Can Tyler, Kinsey, Scot, Nina and Rufus stop Lucas from unleashing all the demons into their world before it is too late?

Joe Hill’s writing: I have said it once and I will say it again, Joe Hill’s writing continues to amaze me as he brilliantly wove both horror and comedy into one volume!  I really loved the way that Joe Hill developed the Locke Kids throughout this series as they went from being heartbroken about the death of their father to trying to save everyone from Lucas’ malicious plan while slowly getting over the death of their father.  I really enjoyed the character interactions that the Locke Kids had with their classmates since we mostly saw the Locke Kids interacting with each other more often than they interacted with the other students and I loved the way that some of the relationships (especially between Kinsey and Jamal) had developed even further during these past few volumes. I also loved the way that Joe Hill had all the hanging plot threads established in the previous volumes come together in this volume.  While I was reading this series, I had been wondering for so long about what Lucas was really looking for and what his true intentions are for using the missing keys and when I found out in this volume, I was absolutely blown away with terror and sadness.  I especially loved the way that Joe Hill ended this book as it was pretty bittersweet and yet it fits perfectly with the sweet and horrific tone of this series.

Gabriel Rodriguez’s artwork:  Gabriel Rodriguez’s artwork is as usual beautifully drawn as he does a brilliant job at drawing the expressions on the characters’ faces, especially whenever they are shocked or frightened which happens quite often in this volume!  I also loved the images of the shadow creatures that attack the protagonists since they look truly frightening as they take forms of various creatures such as wolves and skeletons and they are probably the most realistic characters in this volume!

Overall, “Locke and Key: Alpha and Omega” is a fantastic finale to an otherwise brilliant series and even though I am sad that this series has come to a close, I am glad that we got one awesome ending to a highly acclaimed series!

Posted by Ronyell (a.k.a. Rabbitearsblog) at 8:02 PM No comments:

[BOOK REVIEW] The Other Side by Jacqueline Woodson 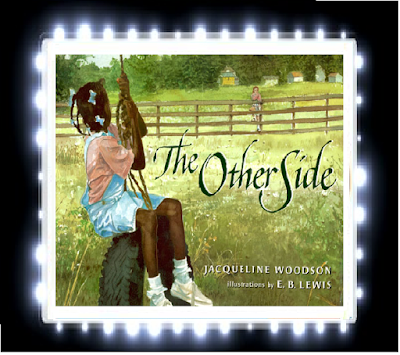 Title: The Other Side

Clover was a young black girl who always wondered about why her mother refused to let her go on the other side of the fence, where a white family lives at.  It was then that Clover meets a young white girl named Annie, who was always seen sitting on the fence and Clover just keeps getting more curious about this young girl.  Clover then decides to talk to Annie and…

Wow! This book was simply amazing! I have read many books that deal with the subject of racism and prejudice in a rather straight forward way, but I have never read a children’s book that actually has the main character question about why racism and prejudice should rule the lives of people.  Jacqueline Woodson’s writing is extremely beautiful and heartwarming as it details a young girl’s curiosity about why she could not communicate with a young white girl and what kind of hold racism and prejudice has on society as a whole.  I loved the way that Jacqueline Woodson really explored Clover’s innocent nature in trying to understand about how racism and prejudice can take its toll on society and how she still tries to have a conversation with Annie, despite her friends and her mother warning her to not talk to Annie because she is white.  I really loved the fact that Clover does not show any prejudice against Annie because she is white and it shows that Clover is extremely open to meeting new people no matter what race they are.  I also loved how much significance the fence has in this story as it shows how divided the blacks and whites are from each other and the fact that Annie is constantly sitting on the fence shows that even racism and prejudice cannot overcome the friendship between two people.  E. B. Lewis’ artwork is drawn beautifully as the characters look so realistic and they really brought out the realism in the situation about racism and prejudice in society.  I also loved the way that E. B. Lewis drew the countryside as it looks truly beautiful and it really captures the beauty of this story.

Overall, “The Other Side” is a brilliant children’s book that helps show children how racism and prejudice cannot overcome a friendship between two people of different cultures.  I would recommend this book to children ages five and up since the subject matter might confuse smaller children.

Posted by Ronyell (a.k.a. Rabbitearsblog) at 7:43 PM No comments: