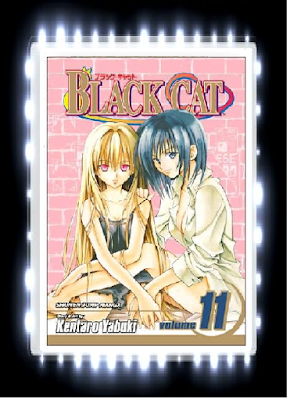 After reading the NAIL-BITING, GRIPPING and SHOCKING tenth volume to Kentaro Yabuki’s famous “Black Cat” series, I just had to pick up the eleventh volume to this series called “Black Cat Volume 11: The Promise” and I was just as blown away by this volume as I was with the previous one!

When Creed accidentally shoots Train with a new nanotech bullet that would have transformed anyone into a monster, it turns out that the effects of the bullet transformed Train into a young child instead.  So, in order to get Train back to normal, Sven, Eve and Rinslet would have to find the mysterious doctor, Dr. Tearju who was responsible for creating Creed’s nanotechnology, and convince her to change Train back.  Unfortunately, since Kyoko and Charden have left Creed’s Apostles of the Stars and Charden decides to leave Kyoko in Train’s care, Chronos is more determined than ever to take down Kyoko and Charden and it is up to Train to protect Kyoko at all costs!

But, will this cost Train his only chance to get back to normal?

Kentaro Yabuki’s writing continues to amaze me as all of the characters are written extremely well and the character development done with Kyoko was done brilliantly! I have always loved Kyoko’s ditzy and carefree personality as it brings so much humor to an otherwise dark series. But in this volume, we get to see a side of Kyoko that we had never seen before as she is shown being determined in keeping her promise to Train to not hurt anyone out of anger, even though it is obvious that she is having a hard time with keeping this promise. I loved seeing this intense side to Kyoko as it made her into a fully dimensional character who was taught to unleash her anger through her powers, but with Train’s help, she was able to learn how to control her emotions without hurting anyone.  It was also interesting in seeing that two of Chronos’ members, Number IV and Number VIII, were so bent on destroying Kyoko and Train, that they had no concerns about harming innocent people as it showed that even though the Chronos organization ruled over half the world and are trying to keep everything in line, they are possibly no better than Creed’s Apostles of the Stars who also want to shape the world into their own vision of a world with no corruption.  Kentaro Yabuki’s artwork is fantastic as all of the characters are drawn realistically and also glow off the pages, which brings life to the artwork.  I especially loved the way that Kentaro Yabuki drew the characters’ facial expressions as they reflect the characters’ emotions extremely well, especially whenever the characters are being threatened or are being serious in a situation.

For those of you who do not like gory violence, there is some violence in this volume, especially when Train fights against the Chronos numbers IV and VIII.  During that battle, there are many scenes where the Chronos numbers slash at Train with their daggers, cutting into his body and drawing lots of blood and that might disturb some readers who do not like seeing blood in books.

Overall, “Black Cat Volume 11: The Promise” is a brilliant volume about redemption that anyone who is a huge “Black Cat” fan will enjoy immensely!

Posted by Ronyell (a.k.a. Rabbitearsblog) at 7:23 PM No comments: 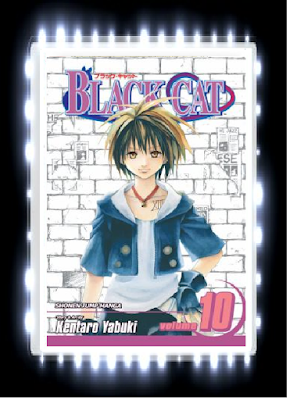 Yes, yes I know.  Even though I have been reading the “Black Cat” manga series since 2009, I had not really been keeping up with reviewing the series at the time. So, this volume will be the first time I had reviewed this series, but hopefully, I will go back and review the previous nine volumes in the future.

Man, I have been enjoying Kentaro Yabuki’s amazing “Black Cat” series ever since I picked up the first volume and to be honest, I had only just read the tenth volume of this series recently since the bookstore I usually got my “Black Cat” manga series from had closed down.  So, I was forced to wait several years to figure out a way to read the rest of this series after the ninth volume ended on such a huge cliffhanger and I was desperate in trying to find out what happens next!  Now, I finally got that chance with the tenth volume of the “Black Cat” series, “Black Cat: Big Changes!”

After the intense battle between Creed and the Cerberus Team in the last volume, it looked like no one survived the battle until it turns out that Creed is still alive (though he lost his arm) and he is now more than ever determined to make Train join his cause.  This results in Creed kidnapping Eve and Sven so that he could get Train to join him by killing both Eve and Sven.

Will Train be able to rescue his friends in time?

Wow! This volume was absolutely amazing! I know that I had gushed over how much I have loved Kentaro Yabuki’s “Black Cat” series before, but this volume was definitely something that was both exciting and shocking at the same time!  I loved the way that Kentaro Yabuki wrote each character, especially Train Heartnet himself as Train is shown to be an extremely intense character who also has some comedic traits that I found endearing.  I also loved the characters Sven Vollfied and Eve as I loved their relationship with Train, especially Train’s relationship with Sven as it is both hilarious and heartwarming, especially during the scenes where Sven beats up Train whenever he botches a chance for the group to earn money, which causes me to laugh out loud constantly!  I also loved the way that Kentaro Yabuki explored the potential threat that Creed poses, as he is trying to kill both Sven and Eve and that showed just how dangerous and insane Creed really is (I mean, if you had read the previous nine volumes, then please tell me that Creed is mentally unstable in his pursuit of Train)!  I also loved the fact that Train was willing to risk his own life to save both Eve and Sven since it proved how much Train really cared about Eve and Sven and what he was willing to put on the line in that situation. Kentaro Yabuki did a fantastic job at balancing the humor and the intensity in this volume as it made the story even more interesting to read and I always enjoyed the characters’ witty banter with each other while they are fighting for their lives! Kentaro Yabuki’s artwork is truly gorgeous and creative as all the characters are drawn halfway realistically and I always loved the way that their hairs always glow on each page!

Overall, “Black Cat: Volume Ten: Big Changes” is definitely one volume that you have to check out in the famous “Black Cat” manga series and just as the title suggests, prepare for some huge changes to happen in this series yet to come!

Posted by Ronyell (a.k.a. Rabbitearsblog) at 6:43 PM No comments: 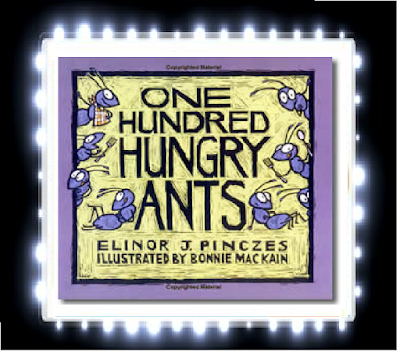 I have read many children’s books that help children deal with solving math problems by presenting the concept in a creative and fun way.  But, I will admit that I have not read any math book quite like this one!  “One Hundred Hungry Ants” is a children’s book written by Elinor J. Pinczes along with illustrations by Bonnie MacKain that deals with solving division math problems and it is an excellent way to help children solve division problems in a fun and creative way!

The book starts off with one hundred hungry ants heading towards a picnic site, determined to fill their stomachs with the delicious food ahead of them.  But, then the smallest ant kept asking the other ninety-nine ants to divide into several groups of one hundred such as dividing into two lines of fifty and four lines of twenty-five, while delaying their time in getting to the picnic site.

Will the one hundred ants make it to the picnic in time?

Wow! Such a simple and innocent picture book and yet one that packs so much humor and clever rhyming schemes that I was totally blown away by this book! Elinor J. Pinczes’ writing is extremely creative and hilarious to read as I was laughing my head off with the small ant’s determination to help make the group of ants move much faster to get to the picnic area.  I really loved the many different ways that the ants formed up into groups such as being into two lines of fifty or four lines of twenty-five as it makes it easier for smaller children to understand how to do division and it is also creative enough for children to participate in the fun of the ants’ determination to get to the picnic area.  Bonnie MacKain’s artwork is creative and hilarious to look at as the artwork is scratchy and yet all of the ants (and the other animals) look so cute on each page.  I especially loved the images of the other animals taking the food away from the picnic while the ants were too busy trying to organize themselves in lines to really notice this and it makes me laugh and feel a little sorry for the ants at the same time!

Overall, “One Hundred Hungry Ants” is a brilliant book that teaches children how to have fun with doing division problems and is hilarious enough to keep many children entertained for years!

Posted by Ronyell (a.k.a. Rabbitearsblog) at 6:11 PM No comments: