[BOOK REVIEW] Goldilocks and the Three Bears by James Marshall 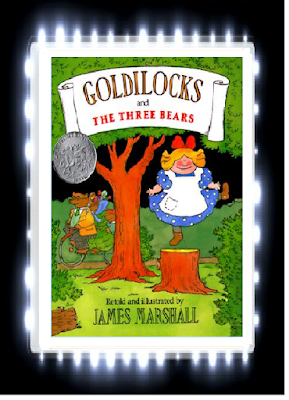 Title:  Goldilocks and the Three Bears

James Marshall has done a magnificent job at both illustrating and writing this book.  James Marshall’s illustrations are truly colorful and hilarious making it a true recipient of the prestigious Caldecott Honor Award.  James Marshall, as usual, makes his characters have pudgy faces and small black dotted eyes, which make the characters, look cute and hilarious at the same time.  Also, the images are extremely colorful and creative, especially of the images of Goldilocks going inside the three bears’ house and the audience can see their house is littered with books, which makes it a dream come true for avid readers everywhere!  James Marshall remains faithful to the original fairy tale format, only this time; he adds some humor to the story such as the way that Goldilocks ate up the porridge by spilling it all over the floor and slurping up the porridge.  Many children will love the bright tone of the book as the book is mainly cute for small children to enjoy while it is full of attitude that older children would enjoy.

Parents should know that Goldilocks was a bit rude in this version of the classic fairy tale as in one incident; she barges into a home without knocking first and made a mess of the three bears’ house without cleaning up after herself.  As the book pointed out, Goldilocks was a naughty little girl who does as she pleases without knowing the consequences of her actions and many small children might be enticed to follow her examples.  Parents should talk to their children about the importance of having good manners and that children should never wandered into a stranger’s home without either knocking first or being accompanied by a parent.

“Goldilocks and the Three Bears” is a brilliant retelling of the classic fairytale that many children, young and old, would love because of its offbeat humor and its cute plotline.  I would recommend this book to children ages five and up since smaller children might imitate Goldilocks’ rudeness throughout this book.