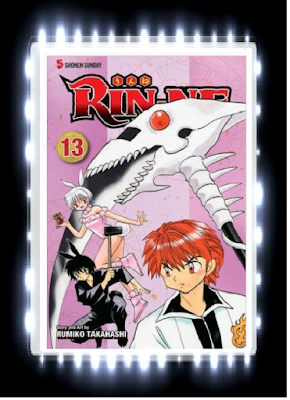 Once again, Rumiko Takahashi has created another hilarious volume that introduces more crazy characters into the universe of “Rin-Ne” and I was just as impressed with the thirteenth volume as I was with the previous volumes!

In this volume, Rinne’s scythe ends up getting damaged during battle and he tries to find a scythe smith that could fix his scythe (for a cheap price of course).  So, he ends up meeting the rabbit-eared twins Right and Left, who offer to fix his scythe for free.  Unfortunately, Rinne will soon learn that Right and Left’s craftsmanship on his scythe might not be what he wanted and he might want his refund back!

Rumiko Takahashi’s writing is as usual fantastic to read as the humor and the action sequences are well woven together and makes the story extremely creative!  I enjoyed the introduction of Right and Left as scythe smiths as I did wondered about whether or not there are people in the Shinigami world who repairs scythes and even though I liked seeing that side of the universe, I personally was thinking about what can Right and Left really bring to the story and how their presence would affect the characters in the future.  I also enjoyed some of the other stories in this volume which included a ghost causing mayhem at a dessert buffet and Rinne and the gang being trapped inside a haunted house during Christmas Eve as they were hilarious and interesting to read.  Rumiko Takahashi’s artwork is as usual fantastic to look at as the characters are drawn in a cute and effective way and I really enjoyed the appearances of Right and Left as they look like cute human characters that have rabbit ears, which make them look unique.

Overall, “Rin-Ne Volume Thirteen” is a fantastic volume that fans of “Rin-Ne” will enjoy and I definitely cannot wait to check out the later volumes in this series!