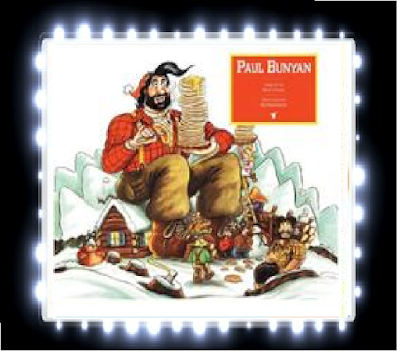 There have been many Rabbit Ears stories that I have not heard of up until now and “Paul Bunyan” is one of them.  “Paul Bunyan” is about the largest and tallest logging man in history named Paul Bunyan who starts his adventures as he tries to chop down all the trees in the Dakotas so that the new settlers could have homes to live in.  Jonathan Winters’ rich narration along with Leo Kottke and Duck Baker’s inspiring music and Rick Meyerowitz’s hilarious illustrations, all combine together to make “Paul Bunyan” one of the most creative and hilarious stories ever created on Rabbit Ears!

Being a huge fan of the Rabbit Ears series ever since I was five years old, I could imagine myself loving this story at first sight… yes, I loved this story at first sight!  Jonathan Winters’ narration is the true highlight of this story as it is rich and full of excitement and the scene where I thought that Jonathan Winters’ narration truly shined was when he provided a hearty laugh for Paul Bunyan, making Paul Bunyan’s character a truly friendly one.  Rick Meyerowitz’s illustrations are extremely hilarious and creative at the same time as the pictures are mainly accompanied by a white background, effectively emphasizing to the reader that it is wintertime in the story.  The image that stood out the most for me was the image of Paul Bunyan himself as he wears a red flannel shirt with green overalls, brown boots, an orange cap and bushy black hair and a bushy black beard.  I also loved the way that most of the characters are always shown smiling towards the audience since it helped brighten the mood of this story!  Leo Kottke and Duck Baker’s music is fantastic as it is mainly accompanied by a solo guitar which gives the story a tranquil spirit that will have both children and adults be mesmerized by the beauty of a solo guitar.  Brian Gleeson’s writing is just as hilarious and brilliant in this book as it was in “Pecos Bill” as Paul Bunyan is portrayed as an optimistic and inventive character who always has a solution to every problem that he comes against.  What really surprised me about this book was the half-way environmental theme at the end of the story. I will not tell you what happened since I do not want to spoil this story for you, but this was the only version of “Paul Bunyan” that I have heard that had an ending that ended on an environmental note and it was this part of the story that I really enjoyed!

Overall, “Paul Bunyan” is definitely one of the most hilarious and creative stories created by Rabbit Ears Productions and I am sure that many adults and children will enjoy this hilarious version of America’s favorite tall tale hero Paul Bunyan!

The book version and the DVD version of this story are one of the same, meaning that they have about the same illustrations and the same writing.  The only difference is that one is animated and the other you can just read out loud to yourself.  I am pointing this out because I noticed that many people buy the books from the Rabbit Ears series, but the books do not contain the audio cd to go with the book, so personally, I usually buy the DVD instead because it has both the narrator and the illustrations combined into one and it is more convenient for me, however I would not discourage anyone from reading the books from the Rabbit Ears series.