[BOOK REVIEW] The Book that Jack Wrote by Jon Scieszka 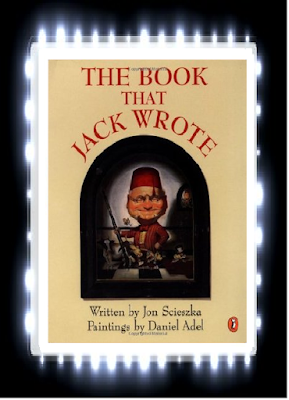 Title:  The Book that Jack Wrote

“The Book that Jack Wrote” is one of Jon Scieszka’s books that the illustrator is not Lane Smith but Daniel Adel.  This book is based off the nursery rhyme, “The House that Jack Built,” except it has a more comic twist to the classic rhyme as all the characters in this book are either hit, pushed, or chased by other characters.  Surely, this book is easily one of Jon Scieszka’s most sophisticated books ever written.

Jon Scieszka has written a more far-fetched version of this classic nursery rhyme by adding in various characters that came from various children’s books such as “Alice in Wonderland” and “Humpty Dumpty” and he makes the story even more creative when he starts the book off with the ending of the man in the tattered coat getting squashed by this book.  Jon Scieszka also made this book extremely funny to read as each character gets clobbered in a slapstick way, such as the Hatter accidentally pushing the Egg over the wall when he tripped on the rug that the bug was eating.  Daniel Adel’s illustrations are surreal and dark as all of the characters have large and realistic looking heads, while their bodies are also realistic, but very small.  The image that really stood out the most in this book is the image of the man in the tattered coat as he has large glasses and a large head on a small body, which is the same man on the cover of the book.

“The Book that Jack Wrote” is a silly book that plays a surreal twist on one of Mother Goose’s lovable nursery rhyme and will surely be an instant treat for many children for many years.  I would recommend this book to children ages five and up due to the fact that smaller children might not like the violent images displayed in this book.