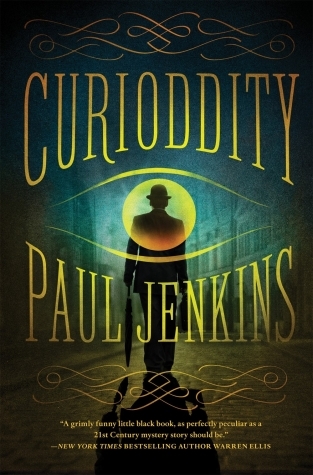 Will Morgan is a creature of habit―a low-budget insurance detective who walks to and from work with the flow of one-way traffic, and for whom imagination is a thing of the distant past. When a job opportunity enters the frame in the form of the mysterious Mr. Dinsdale―curator of the ever so slightly less-than-impressive Curioddity Museum―Will reluctantly accepts the task of finding a missing box of levity (the opposite of gravity). What he soon learns, however, is that there is another world out there―a world of magic we can only see by learning to un-look at things―and in this world there are people who want to close the Curioddity museum down. With the help of his eccentric new girlfriend Lucy, Will will do everything he can to deliver on his promise to help Mr. Dinsdale keep the Curioddity Museum in business.
Curioddity is Paul Jenkins’ debut novel... exciting, fast-paced, and uncanny. A must-read.

Six days ago, astronaut Mark Watney became one of the first people to walk on Mars.
Now, he’s sure he’ll be the first person to die there.
After a dust storm nearly kills him and forces his crew to evacuate while thinking him dead, Mark finds himself stranded and completely alone with no way to even signal Earth that he’s alive — and even if he could get word out, his supplies would be gone long before a rescue could arrive.
Chances are, though, he won’t have time to starve to death. The damaged machinery, unforgiving environment, or plain-old “human error” are much more likely to kill him first.
But Mark isn’t ready to give up yet. Drawing on his ingenuity, his engineering skills — and a relentless, dogged refusal to quit — he steadfastly confronts one seemingly insurmountable obstacle after the next. Will his resourcefulness be enough to overcome the impossible odds against him?

Dimple Shah has it all figured out. With graduation behind her, she’s more than ready for a break from her family, from Mamma’s inexplicable obsession with her finding the “Ideal Indian Husband.” Ugh. Dimple knows they must respect her principles on some level, though. If they truly believed she needed a husband right now, they wouldn’t have paid for her to attend a summer program for aspiring web developers…right?
Rishi Patel is a hopeless romantic. So when his parents tell him that his future wife will be attending the same summer program as him—wherein he’ll have to woo her—he’s totally on board. Because as silly as it sounds to most people in his life, Rishi wants to be arranged, believes in the power of tradition, stability, and being a part of something much bigger than himself.
The Shahs and Patels didn’t mean to start turning the wheels on this “suggested arrangement” so early in their children’s lives, but when they noticed them both gravitate toward the same summer program, they figured, Why not?
Dimple and Rishi may think they have each other figured out. But when opposites clash, love works hard to prove itself in the most unexpected ways.

Create your survey with SurveyMonkey
Posted by Ronyell (a.k.a. Rabbitearsblog) at 6:57 PM