[ARC REVIEW] The Tooth That's on the Loose! by Chris Robertson (@XistPublishing, @booksbychrisr) 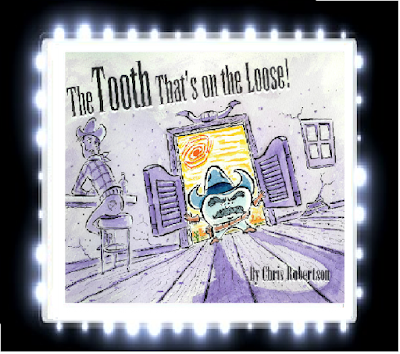 I would like to thank NetGalley and Xist Publishing for providing me a copy of this book in exchange for an honest review.

I will admit that I had only read a few children’s books that dealt with the theme of children losing their baby teeth (mainly Marc Brown’s “Arthur’s Tooth”).  So, when NetGalley offered a children’s book called “The Tooth that’s on the Loose!” by Chris Robertson that has a creative take on children losing their baby teeth, I knew that I had to get this book as soon as possible!

Who is that toothy and wiggly varmint who is running around town, causing mayhem wherever he goes?  Tooth Be Wiggly (T.B. Wiggly, for short) that’s who!  This outlaw goes around leaving holes in people’s mouths (in other words, taking people’s teeth and causing a hole in their mouths where the teeth used to be) and Sheriff Tex is trying to recruit some kids to help him bring down this outlaw!

Can the kids bring down T.B. Wiggly?

I must admit that I was quite impressed with this creative and odd little book!  Chris Robertson has done a great job at making a dilemma that kids would have, which is losing their baby teeth at a young age and turn that dilemma into an outlaw villain named T.B. Wiggly, which made this book truly creative and interesting to read!  I also liked the fact that Sheriff Tex was the one narrating the story and telling the audience who T.B. Wiggly is and why he has to be stopped as it allows us to explore the world through the characters’ point of view.  I really like the way that Chris Robertson is able to incorporate so much humor in this book as I cannot help but laugh at the idea about a living tooth going around causing mayhem wherever he goes!   Chris Robertson’s artwork is hilarious and exaggerated to look at, especially of the image of T.B. Wiggly himself as he is a tooth that has a large black mustache and tiny beady eyes that portrays his rugged personality.  I also loved the mischievous looks that T.B. Wiggly gives to the audience as it helps lets the audience know that T.B. Wiggly is up to no good!

The reason why I took off half a point from the rating was because I felt that more could have been done with T. B. Wiggly himself as he felt like a one-sided villain of the story whose only purpose of being in this story is to be the generic bad guy who steals people’s teeth.  While I understand that T.B. Wiggly is representing the dilemma that young children go through, which is losing their baby teeth, I sort of wished that there was more development to his character besides being the bad guy that would make him stand out more in the story.

Overall, “The Tooth that’s on the Loose!” is a truly creative story for children who are going through losing their baby teeth and want to read a story that tackles this issue in a humorous and creative way!  I would recommend this book to children ages four and up since there is nothing inappropriate in this book.