The Friday 56 #2: Vision in White by Nora Roberts

Hey everyone! I'm participating in another book meme called the Friday 56, which is hosted by Freda's Voice! Here are a couple of rules for this meme:


Rules:
*Grab a book, any book and find a creative way to showcase your 56. It can be a photo of the book and the 56 in comments or whatever you come up with.*Turn to page 56 or 56% in your eReader
(If you have to improvise, that's ok.) *Find any sentence, (or few, just don't spoil it)*Post it.*Add your (url) post below in Linky. Add the post url, not your blog url. 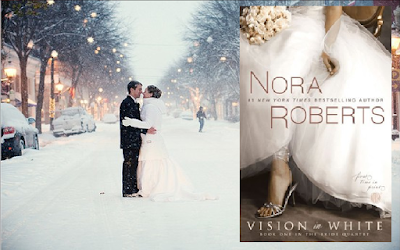 Mac crouched, zoomed in rather than risk going closer and losing the shot.  Was it the same bird who'd smacked into her kitchen window? she wondered.  If so, he certainly seemed undamaged and unruffled as he sat like a single flame on the white-laced branch.


She caught the moment then, taking three shots in rapid succession, slight changes in angles that coated her jeans with snow as she inched left.

Then the bird took wing, swooped over the frozen sea, through the bright light, and was gone.   pg. 56