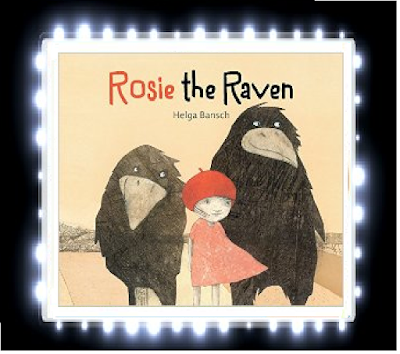 I would like to thank NetGalley and Annick Press for providing me a copy of this book in exchange for an honest review.

Now, I have heard many stories that involve a human character being adopted by an animal family or being born with an animal family.  So, when I found this interesting children’s book called “Rosie the Raven” which is written and illustrated by Helga Bansch on NetGalley, I just had to check this book out and it was a pretty sweet and short little read!

The story starts off with a pair of raven parents seeing their five eggs hatching and while the four other eggs had baby ravens hatching out, the fifth egg had a little human girl hatching out!  The little girl was named Rosie and at first, Rosie did not notice that she was different from the other ravens.  But when the other birds started making insulting comments about Rosie’s strange appearance, Rosie then wanted to be like her brothers and sisters by trying to fly and make caw noises.  But Rosie soon finds out that she could not do the things that her brothers and sisters could do and it was then that she discovered that her unique appearance might actually have some benefits…

As I mentioned before, I have seen many stories that has a human character being adopted by an animal family, but I had never read an animal/human family story where the main human character was actually born to a family of animals.  Helga Bansch has done an excellent job at conveying the message of the importance of family through a supernatural yet heartwarming way as Rosie is presented as being a human who was somehow born the natural way a baby raven would be born…by hatching through an egg.  There was no clear explanation about how this phenomena even happened and Rosie’s raven family did not seem to mind how bizarre this event is, which really made the story truly heartwarming to read as it shows that Rosie’s raven family does not care about how different Rosie looks from the other Raven children, they just care that Rosie is part of the family.  Helga Bansch’s artwork is quite unique as the characters are drawn in a scratchy manner and the colorings are a bit of an earthly hue as we mainly see black, white and pink colors in the artwork.  I also thought it was quite unique that Rosie’s skin tone is completely white, which makes her look extremely pale and it gives her a sort of unnatural appearance that really makes her stand out in the story.

Parents should know that some of the images in this book might be a tad bit scary for some children, especially since most characters look quite unnatural in this book.  Probably the images that might scare some children the most would be the close up images of Rosie’s face as her eyes tend to look blank and her eyes seem a bit too misshapen.  There were also the images of the other birds as they have newspaper collages as their feathers and that makes them look quite uncanny.  Parents might want to read this book first to see if their child would enjoy seeing strange imagery in a book.

Overall, “Rosie the Raven” is a truly beautiful story about the importance of being in a loving family that cares about you no matter how different you are from them.  I would recommend this book to children ages five and up since the some of the strange imagery might scare some children.