[ARC REVIEW] Generation Zero: We Are the Future Volume 1 by Fred Van Lente 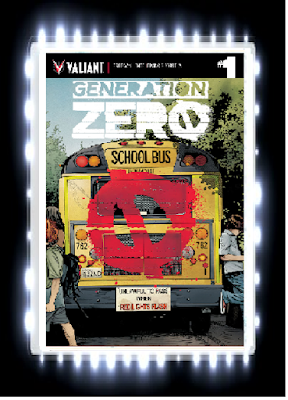 Title:  Generation Zero:  We Are the Future Volume 1

I would like to thank NetGalley and Valiant Entertainment for providing me a copy of this book in exchange for an honest review.

Now, as everyone knows, I am a huge “X-Men” fan and because of that, I always enjoyed reading stories that involve the main characters having a different array of powers and use those powers to save the world.  So, when I picked up “Generation Zero: We Are the Future Volume One” from NetGalley, I was really excited to check this comic out and I was ultimately impressed with this comic!

The story starts off with a young teenage girl named Keisha Sherman, who lives in the mysteriously futuristic town of Rook, Michigan.  Her father is the sheriff of the town and she is considered an outsider at her school for being a gothic girl.  One day however, Keisha ends up getting in a relationship with a boy named Stephen and just as their relationship hits an all-time high, Stephen is suddenly killed in a car accident.  This event causes Keisha to try and find out what really happened to Stephen and she ends up trying to get help from a mysterious group of kids called “Generation Zero.”   The Generation Zero kids ends up becoming students at Keisha’s school and it was then that Keisha starts to notice that the Generation Zero kids are not your average students as they seem to possess supernatural powers and they are also engaged in a war to fight for the rights of the kids that are just like them!

Can the Generation Zero kids help Keisha find Stephen’s murderer and what is really going on with the town of Rook?

Read this comic to find out!

Fred Van Lente’s writing: Wow!  I was seriously impressed with this comic book as even though I had read many comic books where the main characters have supernatural abilities that would help them defeat various villains, I had never read a comic book that features such characters, but also weaves in a story full of mystery and high school drama all into one graphic novel!  I loved the way that Fred Van Lente was able to balance mystery and science fiction elements into the story as I was intrigued by the futuristic world that Rook is set in, while also enjoying the mystery aspect of the story as we try to find out what kind of secrets the town of Rook is hiding from its citizens.  I also loved the way that Fred Van Lente wrote each character in this story, although to be honest, most of the characters are not fully developed yet, with the exception of Keisha due to her being the protagonist of the story.  The fact that Generation Zero consists of kids who have super powers was really interesting to me as I wanted to know how these kids have powers in the first place and what kind of war they are fighting against.

Francis Portela’s artwork:  Francis Portela’s artwork is simply gorgeous to look at as all the characters have a distinctive look that make them really stand out from each other, especially Keisha’s appearance as she is portrayed as having purple hair with one side of her head being shaved off and wears punk rock clothing that really brings out her gothic nature.  I also loved how stylized the characters as they reminded me of characters that popped out of comic books from the 1990s and I really enjoyed the scenes where there is energy beams involved as the pages literally glow through the imagery of the energy beams.

Overall, “Generation Zero: We Are the Future Volume One” is a fantastic read, especially if you are a huge fan of “X-Men” and you love reading stories about characters that possess supernatural powers!  I am definitely looking forward to reading the next volume in the near future!