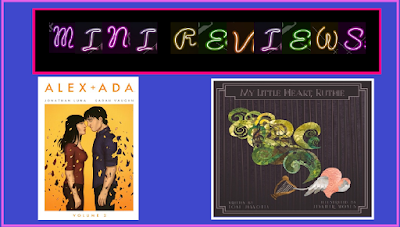 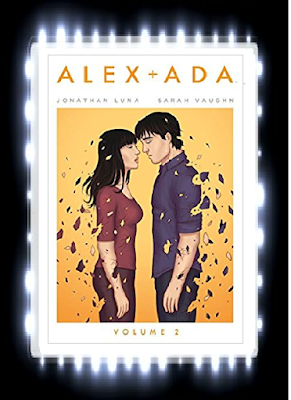 Content Rating:  Ages 18+ (Some Strong Language and a Sex Scene)

After the events of the first volume, Alex has finally unlocked Ada, which means that Ada now has the ability to think for herself.  Unfortunately, the government had picked that time to enforce a crackdown on all androids living in the city as they found out that there are some sentient androids running around the city and they will go to great lengths to find each sentient android and punish them.  This new crackdown puts Ada in great danger as she has become sentient now and the government could track her down if she is not careful.  Meanwhile, Alex and Ada start developing feelings for each other, but due to the government crackdown on sentient androids like Ada and due to Alex’s conflicting feelings about whether or not he should fall in love with Ada, despite her being an android, will Alex and Ada have a chance at a real relationship?

Read this graphic novel to find out!

Jonathan Luna and Sarah Vaughn’s writing continues to be excellent in any way possible and I believe that the story took an even more intense and exciting direction in this volume!  I loved the way that both Jonathan Luna and Sarah Vaughn wrote Alex and Ada’s relationship with each other as I was sitting on the edge of my seat trying to see if Alex and Ada would actually take the next step in their relationship!  I also liked the fact that the story tackled the issues about what it means to fall in love with someone who is not human, as we get to see Ada’s anguish at not having Alex reciprocate his love for her right away due to her being an android and I enjoyed seeing how Ada tries to deal with her emotions when it comes to love and heartbreak.  I also loved the intensity that Jonathan Luna and Sarah Vaughn brought to this story as I was seriously sitting on the edge of my seat trying to see if Ada will be found out by the government because of her sentience and how Alex is trying to keep her safe.  Jonathan Luna’s artwork in this volume is just as luscious and gorgeous as it was in the last volume as the characters and their environments just glow off the pages!  I especially loved the image of Alex standing in the rain as the environment looks dark and gloomy and I just loved the shadows that show up underneath the characters as it gives the artwork an authentic feel.

For anyone who does not like strong language, there is a bit of it here with one utter of the “s” word.  But, the language is not as strong here as in other comics geared towards an older audience.  Also, there is a sex scene in this volume and even though it is not quite explicit, this may be troubling for anyone who does not like reading sex scenes.

Overall, “Alex + Ada Volume Two” is even more exciting than the first volume and I hope to read the series’ conclusion in the next volume! 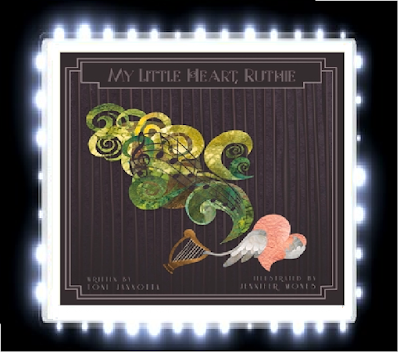 I would like to thank Edelweiss and BookBaby for providing me a copy of this book in exchange for an honest review.

The book starts off with a heart named Ruthie, who is living alone in an icy cell and the only thing she has with her is her beloved harp.  One day, Ruthie feels a warm breeze blow into her cell and she goes out to see where the breeze is coming from.  It turns out to be coming from another fellow heart named Clyde who encourages Ruthie to come and play her harp with him.  But, Ruthie refused to play her harp because of a past incident that has left her emotionally scarred.

Can Clyde help Ruthie get out of her icy cold cell that she has locked herself into?

Wow!  I was quite amazed at how this book managed to tackle the issue of self esteem issues in such a beautiful and creative way!  Toni Jannotta has done a great job at writing this book as the book is told in a poetical way and the verses really fit in well with the tone of the story.  I also like the way that Toni Jannotta tackled the subject of self-esteem issues as I truly felt for Ruthie when she was ridiculed for her harp music and it caused her to withdrew within her cell to prevent herself from playing her harp in the public again.  I really liked the character Clyde as he was trying to encourage Ruthie to play her harp and I think it was quite important to have a character in this book that can teach children about believing in yourself, despite what other people say and be quite supportive of the main character.  Jennifer Mones’ artwork is truly beautiful and creative as most of the artwork is done in paper cut outs and it really brings some true imagination to the story.  I also loved the fact that Ruthie and Clyde are portrayed as hearts who have angel wings as it gives this book quite an angelic feel.

The reason why I gave this book a four-star rating was because the pacing was a bit slow at some parts and I felt like I had to rush through some scenes just to get to the meat of the story, which did not really happen until towards the end of the book.

Overall, “My Little Heart, Ruthie” is a truly beautiful and heartwarming story about the importance of believing in yourself even if everyone else is against you and it is a truly important book for children who have also gone through self-esteem issues to read!  I would recommend this book to children ages five and up since there is nothing inappropriate in this book.