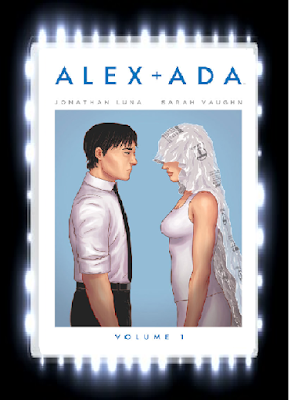 Alright, so I have heard of stories where human beings fell in love with monsters and such, but I had never read a story where the main character develops feelings for an android and starts questioning about what it means to be human all at one time!  So, the moment I picked up Jonathan Luna and Sarah Vaughn’s graphic novel “Alex + Ada Volume One,” I knew that I just had to give this graphic novel a shot!

Alexander Wahl (Alex for short) had just gone through a tragic breakup with his ex-girlfriend Claire and ever since then, he’s been having a tough time trying to move on with his life and find someone else to love.  One day however, Alex’s grandmother decided to send Alex a female android for his birthday so that way, he would not be so lonely anymore.  At first, Alex did not want this new android since he was not ready to move on from his ex-girlfriend and he believed that he could never love this android like he could with a real human being.  But, when Alex discovers some terrifying secrets regarding the Androids and what happened to their free will after the events of the Nexaware massacre, he decided that he will do anything to allow Ada the android the will to be able to think for herself, even if that means that Alex could get into big trouble with the government if they found out about this.

Jonathan Luna and Sarah Vaughn’s writing:  Wow! I was seriously impressed with this story!  I loved the way that both Jonathan Luna and Sarah Vaughn wrote this story as this story explores both how humans judge the sentience of technology and what it means to have free will and have the right to think for yourself.  I like the way that Jonathan Luna and Sarah Vaughn wrote Alex’s character as he was quite an interesting character to read about.  Even though there were times where Alex seemed like a flat character, I like the fact that his curiosity about the sentience of androids makes him want to explore the society he lives in and decide on whether or not he wants Ada the android to have human emotions so that he could give her the right to think for herself.  I was also interested in Ada’s character as she is shown to be a regular android at first and the fact that Alex wants to give her real human emotions makes me excited to see where Ada’s character will go after this.  I also like the fact that Ada’s character introduces the themes of what it means to be a human being and whether or not humans considered non-human beings such as androids as being capable of feeling true human emotions.

Jonathan Luna’s artwork:  Jonathan Luna’s artwork is just so gorgeous to look at as all the characters seem to glow off the pages.  I also loved the artwork of the futuristic setting that the characters reside in, such as seeing futuristic technology like holographic television and having humans equip sensors in their brains to do their daily chores.

The reason why I took off half a point from the rating was because I felt that the beginning of the story was a bit too slow in pacing as it took a long time to get to the exciting part of the story and there were times where I felt that the story was a bit too dialogue heavy, especially during the news reports scenes.  Also, for anyone who does not like language, there is a bit of it here, although it is not as strong as some of the more mature graphic novels.

Overall, “Alex + Ada Volume One” is a truly intriguing story about what it means to be human and I am definitely interested in seeing what happens to both Alex and Ada in the next volume!