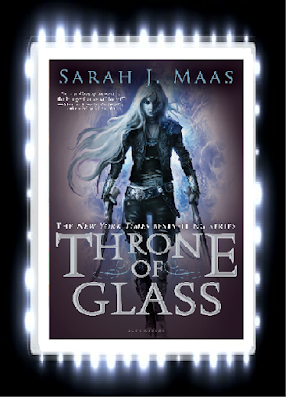 “You could rattle the stars," she whispered. "You could do anything, if only you dared. And deep down, you know it, too. That’s what scares you most.”

Now, I have a shameful confession to make: even though I had heard nothing but good things about Sarah J. Maas’ “Throne of Glass” series, I have never actually read the first book in the series “Throne of Glass” (although I had read “The Assassin’s Blade” first) until just recently and this book has been on my TBR shelf for many years now!  Now that I finally got the chance to read “Throne of Glass,” I am seriously awed by the highly creative and intense world that I was thrown into!

The story starts off with a young assassin named Celaena Sardothien who was toiling away in the slave mines of Endovier and just as it seemed that all hope of was lost for Celaena to ever break out of Endovier, the young crown prince of Adarlan named Prince Dorian Havilliard came in and said that he will set Celaena free if she becomes the King of Adarlan’s Champion.  However, Celaena must first go toe to toe with other assassins, thieves and warriors in a competition that will determine who will be strong enough to be the King’s Champion.  Although Celaena hates the King of Adarlan for destroying her hometown, she does want to be set free from her hardships and agrees to the terms.  However, once Celaena appears in the kingdom of Adarlan, she finds out that some kind of monster is brutally killing each Champion contestant and she will have to figure out a way to save the kingdom from this mysterious evil force!  Meanwhile, Celaena starts having relationship problems with both Chaol Westfall, the stern and loyal Captain of the Guards who believes that Celaena is a threat to the Crown Prince and Prince Dorian Havilliard, the intelligent and optimistic son of the King of Adarlan who has fallen in love with the assassin.  Who will Celaena choose?

Wow…. just wow!!!  I cannot believe I waited this long to actually read this book from one of the most acclaimed novels ever written!  Sarah J. Maas has done a spectacular job at creating this intriguing fantasy world where magic exists, but got banned by the kingdom and it forces the characters to rely on their wits and strengths to survive in this world.  I was also a bit surprised at how the story seems to be like a medieval version of “The Hunger Games” as the competitors have to risk their lives to become the King’s Champion, but the story never felt like an exact replica of “The Hunger Games” as it has the main character, Celaena, entering the competition to regain her freedom rather than have the competitions be a yearly thing for the kingdom. Sarah J. Maas also did a great job at writing these characters, especially Celaena, Chaol and Dorian themselves and I loved the fact that Celaena is portrayed as a strong female protagonist who is not afraid to stand up for what she believes in and is an awesome fighter to boot!  I also enjoyed the characters Prince Dorian and Chaol themselves, as they provided an interesting dynamic with not only themselves, but with Celaena also.  I loved the fact that Chaol is the stern and highly protective Captain of the Guards who is always looking out for both Celaena and Dorian, no matter how gruff he appears to both of them, while Dorian is the carefree and optimistic prince who wants to see the good in everyone, no matter how suspicious that person is.  As for the obligatory LOVE TRIANGLE that occurs between Celaena, Chaol and Dorian, I will discuss that in the CONS section down below.

For anyone who does not like gory violence, there is a good bit of gory violence going on in this book with various characters getting murdered in a graphic manner, such as having their organs ripped out of their bodies and having their faces being skinned off.

Alright, so this is a small nitpick that I had with this book and that is the obligatory LOVE TRIANGLE that happens in the story.  Now, luckily, the LOVE TRIANGLE in this story is not played up too high, but there were times where I was a bit annoyed with the fact that Celaena had a hard time trying to choose between Chaol and Dorian throughout the book and I actually wished that Celaena actually chosen who she wanted to be with early on in the story rather than spend most of the book going back and forth on whether she wants to spend her time with Chaol or Dorian.

Overall, “Throne of Glass” is a fantastic book that fans of strong female assassins and magical worlds will greatly enjoy and now I am off to read the second book in the “Throne of Glass” series, “Crown of Midnight!”