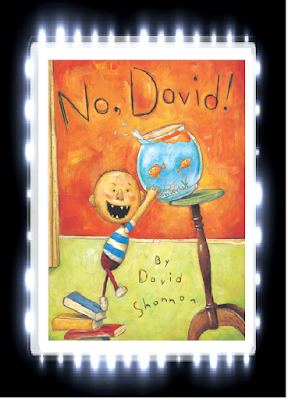 “No, David!” is David Shannon’s first book of the “David” series and has won the Caldecott Honor Book Award, which it richly deserves that honor.  This book details the adventures of David being bad while his mother continually tells him: “NO, DAVID!”

David Shannon’s first attempt at making the “David” series is truly a masterpiece to this very day.  David Shannon’s writing style is memorable as he writes in a simple preschool format that is easy enough for readers at a young age could relate to as he details David’s mischievous adventures.  David Shannon’s illustrations are truly inspiring as he illustrates David with a large head and sharp teeth and his gleeful expressions as he seemly enjoys the mischief that he causes.

“No, David!” is one of David Shannon’s finest children’s books ever created and is surely to make anyone laugh out loud whenever they witness David’s mischief in the household and making his mother go crazy when she keeps telling him, “NO, DAVID!”  Even though this book might entice bad behavior towards children, it is suitable for children ages four and up since the vocabulary and the writing style are simple to read for any preschooler.