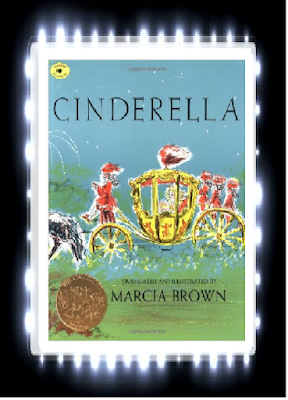 Marcia Brown has indeed created many children’s books throughout her life.  Imagine my surprise and excitement when I read her first children’s book!  Marcia Brown has made this version of Cinderella much more tame than in the other versions of “Cinderella” I have seen as Cinderella’s stepsisters in this version seem a bit nicer to Cinderella by easily telling Cinderella about their time at the ball, although they still maintained their cruel nature by teasing Cinderella about not going to the ball, which is a bit unusual for in most versions that I have read of “Cinderella,” the stepsisters were always mean to Cinderella regardless of the situation that Cinderella was in.  Marcia Brown’s illustrations are truly beautiful and simplistic in this version of the classic fairy tale as Cinderella truly looks beautiful with her wavy golden hair and beautiful black eyes.  Also, the illustrations are a bit simplistic due to the fact that there is barely any color in the background, but the color is mainly focused on the characters, which allows the characters to stand out more, which I have never seen done in any other book that have simplistic illustrations.

“Cinderella or the Little Glass Slipper” is a brilliant retelling of the classic fairy tale that I think will be more suitable to children who want to read the more tame version of the fairy tale and will be a great hit for children everywhere.  I would recommend this book to children ages four and up since there is nothing inappropriate in this book other than the stepsisters’ poor behavior towards Cinderella.