[BOOK REVIEW] In a Dark, Dark Room and Other Scary Stories by Alvin Schwartz 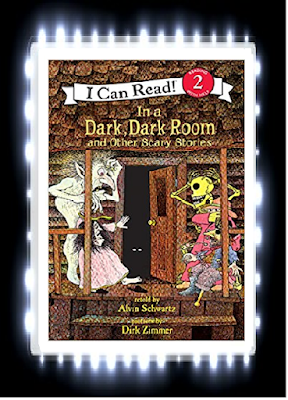 Title:  In a Dark, Dark Room and Other Scary Stories

Now, I have been introduced to Alvin Schwartz’s works before through his famous and controversial “Scary Stories to Tell in the Dark” series and after I found out that Alvin Schwartz had written another pair of horror stories for children called “In a Dark, Dark Room and Other Scary Stories,” of course I had to give this series a whirl!

This is a collection of horror stories for children and there is a total of seven stories being told in this book.  The stories featured in this collection are:

Wow!  Alvin Schwartz really knows how to create stories that are both scary and tame for any child and all of these horror stories contain a mixture of humor and horror that made me both smile and cringe at the same time.  I loved the fact that Alvin Schwartz did some research on these stories and allows the readers to understand where these stories came from as he mentions it in the “Where the Stories Come From” section at the end of the book as I wanted to know where these stories came from.  I also enjoyed many of the stories in this book with my favorites being “The Green Ribbon” and “In a Dark, Dark Room” as I believe that those are the creepiest stories in this collection, especially “The Green Ribbon!”  Dirk Zimmer’s artwork conveys both horror and comedy in this book as the characters have exaggerated features which includes some of the characters have large noses and wide eyes and I also loved the way that the characters look so pale and frightened in most of the images as it shows what kind of horrors the readers will be introduced to when they start reading this book!

Overall, “In a Dark, Dark Room and Other Scary Stories” is a great collection of horror stories that children will gladly enjoy during Halloween time!  I would recommend this book to children ages six and up since there are some scary stories in this book that might creep out younger readers.