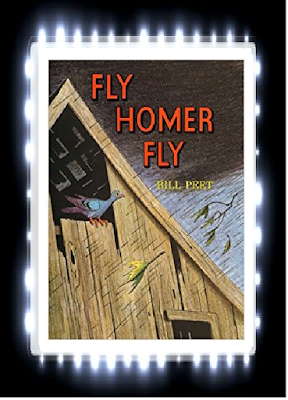 “Fly Homer Fly” is a brilliant children’s book from Bill Peet and it is about how a lonely pigeon named Homer finds a friend in Sparky the sparrow when he tries to see what life is like in the big city. “Fly Homer Fly” is a lovely story about true friendship that children will love for many years.

Bill Peet’s illustrations are beautiful, especially of the images of Homer and the other pigeons in Pigeon Plaza as the pigeons look different from each other since they have different colors and shapes and Homer seems to be the smallest pigeon out of all the other pigeons. The images that stood out the most were the images of Sparky the sparrow and the largest pigeon that Homer meets up with. Sparky the sparrow looks so small and cute and is the smallest bird in the entire book, while the biggest pigeon looks rough as its feathers are all ruffled up. Bill Peet’s story about Homer trying to adjust to the city life and meeting Sparky the sparrow is truly inspirational as Homer and Sparky bond with each other throughout the book and Sparky would try his best to help out Homer in the city, which proves that he is a true friend to Homer. Children can easily relate to Homer and Sparky’s friendship as many children have friends who would do anything to help them out of a difficult situation the best they can.

“Fly Homer Fly” is a great classic book for children who love reading books about friendship. I would recommend this book to children ages five and up since the length of this book might bore smaller children.