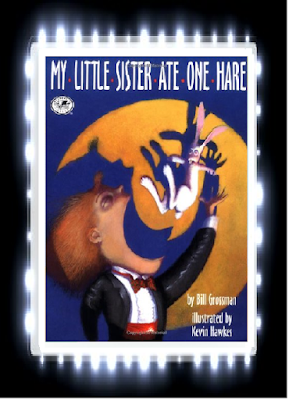 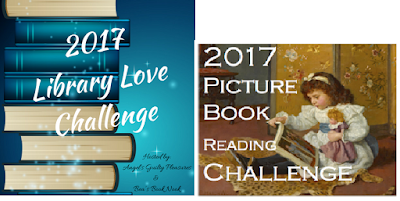 This story is basically about a young girl who is the titular “little sister” being able to eat various animals which includes one hare, two snakes, three ants, four shrews, five bats, six mice, seven polliwogs and so on and so forth.  Then, when the little sister tried to eat ten peas…

Can the little sister eat the ten peas and what will happen once she does?

Now, when I first saw this book, I will admit that I was a little curious to see what this book was all about (especially with the image of a little girl eating the hare on the cover grabbing my attention).  So, when I finally picked this book up, I was having a great time reading this really bizarre yet hilarious story!  Bill Grossman has done an excellent job at writing this story as the story is both hilarious and creative to read and I really enjoyed the scenes where we see the little sister eating various animals such as shrews, bats, polliwogs, and ants while performing these acts on a theater stage.  I like the fact that the little sister dressing up as various characters such as a magician and a snake charmer while she is eating the animals added a certain flair to the story as it makes seem like the little sister is in a stage performance while she is performing these tricks to the audience.  Kevin Hawkes’ artwork is extremely comedic and exaggerated as we see various shots of the little sister’s mouth going extremely wide as she is about to eat an animal character and it was entertaining seeing these images pop out towards the audience in an unconventional way!  Probably my most favorite images in this book are of the little sister dressing up in different costumes such as a magician, a snake charmer, a pirate and a cat while she is performing on stage as they give her performances even more creativity!

Parents should know that the scenes where the little sister eats up the animals alive might either be too disturbing or too gross for some small children to handle and they might want to read this book first to see if their child can handle a book where the main character eats animals alive.

Overall, “My Little Sister Ate One Hare” is a hilarious and bizarre story that children who love reading about characters who do weird activities will surely enjoy for many years to follow! I would recommend this book to children ages five and up since the scenes where the little sister eats various animals alive might either scare or gross out some children.