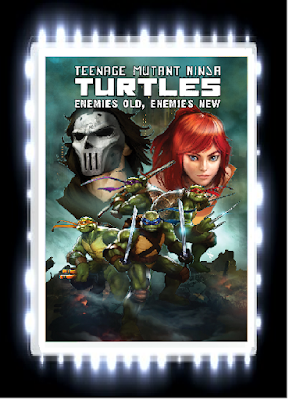 I would like to thank NetGalley and IDW Publishing for providing me a copy of this book in exchange for an honest review.

In this reboot of the famous franchise “Teenage Mutant Ninja Turtles,” the story starts off with Master Splinter explaining to the audience about how he remembers a previous life in Feudal Japan where he was known as an honorable ninja named Hamato Yoshi, who was a member of the Foot Clan.  But one day, when Hamato Yoshi’s former ally Oroku Saki wanted to kill a group of innocent people to show everyone that the Foot Clan was powerful, Yoshi disagreed with him and left the clan.  Yoshi’s depature caused Oroku Saki to go to Yoshi’s house and murder his entire family and also Yoshi himself and at this moment, the audience wonders what became of this life that Master Splinter was reminiscing about.  Meanwhile, during the present time, April and Casey Jones had finally met each other due to April needing someone to teach her self-defense, which Casey was obliged to do and Casey needing a tutor to help bring his grades up in school, which April could do.  Later on, Baxter Stockman is up to no good as he creates a set of machines called “Mousers” in order to take down the Ninja Turtles and to grab Master Splinter so that way he could use Splinter’s blood to make super powered mutants for General Krang’s army!

Kevin Eastman and Tom Waltz’s writing:  I will admit that I was a bit interested in seeing how a reboot of “Teenage Mutant Ninja Turtles” would look like since we were going to get a reboot of this long running franchise eventually.  So after reading this graphic novel, I was actually quite impressed with how they rebooted the origin story of the Ninja Turtles while remaining faithful to the original series.   I loved the fact that Kevin Eastman and Tom Waltz retold Hamato Yoshi and Oroku Saki’s backstory to the audience since I have always felt that it was important to explain about Master Splinter’s backstory to the newer audience so that way, they could understand the world of the Ninja Turtles much better if they know about Hamato Yoshi and Oroku Saki’s backstories. Even though I wished that more was explored with in this department, I enjoyed how the characters interacted with each other, especially the turtles with Master Splinter and April and Casey with each other!  I like the fact that the turtles refer to Master Splinter as their father as it made their relationship much more heartwarming to watch and actually gives a closer emphasis on how the turtles see Master Splinter as more than their sensei. I also enjoyed the growing interaction with April and Casey as I enjoyed seeing them share their personal lives with each other and I was also interested in how April was able to witness the turtles and Master Splinter’s transformation into the mutated heroes they are known as now and I am really interested to see where April and Casey will go after this volume!

Dan Duncan and Mateus Santolouco’s artwork: Even though the artwork is a bit too scratchy, I do enjoy the dark and gritty feel of the artwork as it shows that this retelling of the Ninja Turtles is dark and edgy like the original Mirage Comics and I also enjoyed the action sequences as they are shown in great detail.

The reason why I gave this book a three and a half star rating was because while the story was interesting, I felt that the story tended to jump around a bit too much due to having so many events happening in one volume (the turtles learning about their origins, April and Casey meeting each other, Baxter Stockman building his mousers, Krang trying to create an army) and the story felt a bit cluttered as a result.  Also, I felt that while the artwork showed the action sequences in great detail, it was a bit too scratchy for my tastes and it was hard to see exactly what the characters were doing with the artwork being halfway blurred out and not being able to fully see the characters’ actions.

This is a bit of a small nitpick, but I find the fact that in this version, the turtles and Master Splinter were actually Hamato Yoshi and his sons reincarnated to be a bit too far-fetched for my tastes.  Maybe as a long-time fan of this series, I was so used to the turtles just being mutated by ooze and the fact that they are reincarnated in this version just seems a bit odd to me.  Maybe once I read future volumes of this rebooted series, I might start to get used to the idea of the turtles and Splinter being reincarnations of their former selves.

Overall, even though “Teenage Mutant Ninja Turtles: Enemies Old, Enemies New Volume 2” was an interesting read and a pretty decent retelling of the Ninja Turtles stories, the cluttered storytelling and scratchy artwork made this volume a bit difficult to read through at times and I hope it improves in the next volume.