[BOOK REVIEW] The Sneetches and Other Stories by Dr. Seuss 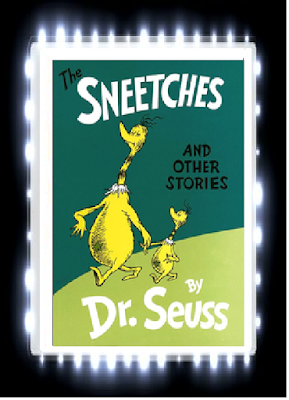 Title:  The Sneetches and Other Stories

Content Rating:  Ages 4+  (Depictions of Prejudice - in a fictional sense)

I have been reading many of Dr. Seuss’ books ever since I was a child, but out of all the books I have read from him, this book was the most effective book I have ever read! “The Sneetches and Other Stories” is a short collection of stories by Dr. Seuss where each of them detailed how to accept other people for who they are. “The Sneetches and Other Stories” is a truly memorable book that displays some of Dr. Seuss’ best works!

Alright, not only will I talk about how I felt about this book, I will also discuss about the various themes in this book from my viewpoint on the situations. Dr. Seuss has certainly done a brilliant job at both illustrating and writing this memorable book about the importance of accepting other people for their different qualities and the consequences if we do not accept them for who they are. Let me discuss about my thoughts on the stories “The Sneetches” and “What was I scared of?” as they were my most favorite stories out of the entire book. In “The Sneetches,” it was obvious that this story was discussing about accepting other people’s differences, or in a more general sense:

The Star-Belly Sneetches believed themselves to be far more superior than the Plain-Belly Sneetches because they possessed qualities that the plain-belly sneetches did not possessed, which were the stars on their bellies. I am guessing that this story was relating to the extreme racism and prejudice going on during the 1960s at the time, since this book was written during the 60s. I really enjoyed this story because it seemed to have a solution at the end of the story, that it is pointless to see who is better than the other and it shows that no matter what your skin color (or in this case, whether you have a star on your belly or not) everyone is still a human being and we are all equal in every way. The other story I wanted to talk about is “What Was I Scared of?” and this story talks about how a young boy was scared of a “pair of pants” when walking through the night on an errand and what was so interesting about this story was that this story was about the fact that it expresses the whole “the person I am afraid of is just as scared of me as I am of him or her” situation. I really loved how the situation was handled at the end of the story and how becoming friends with a person you were once afraid of is the best solution in trying to connect with a person who is different from you. Dr. Seuss’s illustrations are just as creative in this book as they were in his other books! I just loved how the sneetches’ appearances in this book as they are shown as tall and yellow creatures who all look alike, except that some of them have blue stars on their bellies which indicates the differences between the Star-Belly Sneetches and the Plain-Belly Sneetches. I also loved in the story, “What Was I Scared of?” where the majority of the story is illustrated in blue colors, giving this story a spooky mood.
The only problem I had with this book was with the two stories, “The Zax” and “Too Many Daves.” I know that Dr. Seuss is well known for his nonsensical works, but I felt that “The Zax” and “Too Many Daves” were not as memorable as “The Sneetches” and “What Was I Scared Of?” since there was no real solution to the characters’ problems in those stories and they also kind of had abrupt endings that sort of left me feeling incomplete with the stories.

Before I give my final verdict on this book, I like to give my opinions on the issue of racism and prejudice. Personally, I think that racism and prejudice is pretty pointless in society and it will just make more people unhappy with the world and not accept other people for who they are. Does racism and prejudice exist even in today’s society? It definitely does and it is so sad because it seems that people who are against other cultures and races do not want to experience the cultures’ differences and I always think that everyone is equal, no matter what country, culture or race they are apart of. We are all human beings and we should try to learn to get along with other countries and races instead of fighting each other because of fear and hatred. This issue really affects me to the core and I would love to see more people try to get along with each other instead of despising each other for their differences. So, basically overall “The Sneetches and Other Stories” is a great children’s book to use to discuss racism and prejudice issues for young children and I think the more people read this book, the better they gain an understanding about how ugly racism and prejudice really is. I would recommend this book to children ages four and up since there is nothing inappropriate in this book.