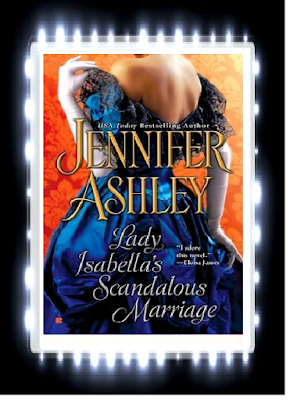 After reading Jennifer Ashley’s classic debut book “The Madness of Lord Ian Mackenzie,” I just had to read the second book in the “Highland Pleasures” series to satisfy my tastes for “highlander romance!” The second book “Lady Isabella’s Scandalous Marriage” definitely did not disappoint me in the least and it stars Mac Mackenzie, Ian’s older brother and his estranged yet strong willed wife, Isabella Scranton! Just like its predecessor, “Lady Isabella’s Scandalous Marriage” has the trappings of the perfect romance: drama, suspense and hot sizzling romance!

Six years ago, Isabella Scranton, daughter of a well respected earl, caused a scandal in London when she married the artistic yet wild Mac Mackenzie. Even though Mac and Isabella seemed to be happily married for three years, their marriage is abruptly in tatters when a tragedy struck and Isabella decides to leave Mac. Three and a half years later, Mac Mackenzie comes back into Isabella’s life a changed man, but Isabella is still not ready to take him back, even though she still has feelings for Mac. While the two former lovers try to patch things up, an imposter suddenly shows claiming to be Mac Mackenzie himself and will stop at nothing to take Mac’s life for himself!

I got one word for this novel: FANTASTIC!

Jennifer Ashley has certainly done a brilliant job at writing this really sensual and heartwarming story about two former lovers who try to gain back their lost love after the tragedy that struck between them. To be honest, this was the first time I have a romance novel where the story starts off with lovers who are already married, but the book spends most its time having the lovers regain the love they lost and it made this book really stand out for me since I am so used to seeing lovers come together by mere coincidence. Jennifer Ashley’s writing is just so beautifully written and probably what I loved most about her writing was of all the characters. As always, I have love for all the Mackenzie brothers and it was awesome seeing them all support Mac and Isabella through their times of trouble. I especially still love Ian Mackenzie as he is as smart and perceptive as ever and it was his perception on Mac’s feelings for Isabella that really helped Mac gets through his marriage. Now onto the good parts: the couple themselves! Mac Mackenzie is like the perfect hero in my book! Not only is he handsome and totally strong, but he is one kind-hearted and witty hero! I loved the way that Mac cares so deeply for Isabella and how he was willing to sacrifice his life to protect her at all costs! I also love his naughty “love” language towards Isabella since it makes my skin tingle! Isabella Scranton is definitely one of the most memorable heroines I have ever read about! I loved the fact that she truly loved Mac, even though I was a bit upset at her for leaving Mac in the first place. Still, I loved the scenes where Isabella was willing to fight anyone who insults Mac, which shows how much she cares deeply for Mac. The love scenes between Mac and Isabella were beyond amazing and sensual that I was practically sweating with anticipation as I was reading through those scenes! Now I will admit that the romantic tensions between Isabella and Mac were not quite as “phenomenal” like Beth and Ian’s in “The Madness of Lord Ian Mackenzie,” but Mac and Isabella’s relationship was still a sight to behold!

For those of you who do not like sex scenes, this novel has plenty of it and they are extremely explicit, so it might be best to skim over these scenes.

Overall, “Lady Isabella’s Scandalous Marriage” is definitely one romance novel you do not want to miss out on! I am definitely going to read the next book in the “Highland Pleasures” series, “The Many Sins of Lord Cameron!”