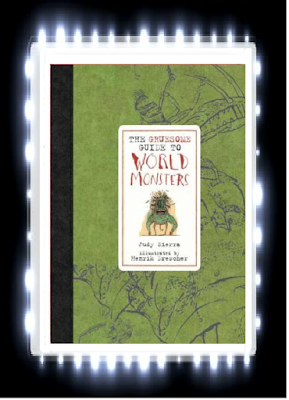 “The Gruesome Guide to World Monsters” is an excellent book about monsters that is presented in a travel guide format. Judy Sierra and Henrik Drescher both work together on this project and therefore, created a book that is a combination of horror and comedy.

“The Gruesome Guide to World Monsters” details various encounters of some of the most dangerous and gruesome monsters around the world. The book describes the monsters’ habits, where they live, survival tips when encountering them, and how dangerous they are to the traveler. There are sixty-three monsters mentioned in this book and only one monster in this book is known to be just frightening, not dangerous. These are the summaries of some of my favorite monsters:

The Rolling Head’s gruesomeness rating is five skulls, which means that it is a fatal monster. It lives in the Sierra Nevada Mountains and this monster came about when a man accidentally cut his finger with a knife. When the man licked the blood off his finger, he enjoyed the taste of blood so much that he started eating his entire body, leaving only his head. The head now rolls around and eats unsuspecting people in his path. The survival tip is not available for this monster.

The Sigbin’s gruesomeness rating is three skulls, which means that it is a very dangerous monster. It lives in the Philippines and it looks like a beagle, but its hind legs is higher then the front part of its body. The Sigbin can fly using its long ears, but watch out for its intestinal gas, for it is very fatal and will kill anyone who stands downwind of the Sigbin. The survival tip is to not stand downwind of a Sigbin and that if a person learns the right magic spells then he or she can fly a Sigbin.

Judy Sierra’s masterful storytelling of describing various monsters around the world is both excellent and morbid at the same time. Sierra goes into great detail about each monster and also gives a clear survival tip to each monster whenever one encounters them. Henrik Drescher’s illustrations are equally special in this book as he draws each monster in a childish yet nightmarish way. It was as if the illustrations came out of someone’s nightmare and they are trying to describe the nightmare by drawing out the images portrayed in the nightmare.

“The Gruesome Guide to World Monsters” is an excellent travel brochure-like book for people who want to learn more about the monsters around the world and how to survive their encounters. This book is a true treat for both kids and adults, but adults may want to steer their younger children away from this book if they are afraid of monsters.