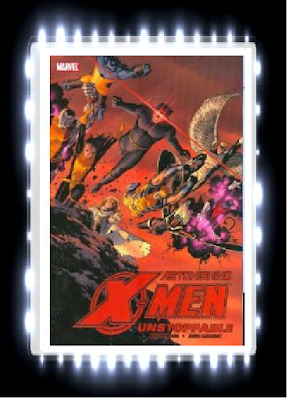 After reading the first three volumes of “Astonishing X-Men” by Joss Whedon and John Cassaday, I was waiting with anticipation in reading the final volume of this fantastic series, “Astonishing X-Men: Unstoppable” and I was perfectly astonished and not disappointed! This volume will definitely not disappoint X-Men fans and will stand the test of time as one of the best endings to a comic book series!

After the events of the third volume “Astonishing X-Men: Torn,” the X-Men are transported into outer space and meet up with Agent Abigail Brand who informs the X-Men that recently the resurrected X-Men member, Colossus is the one who is destined to destroy the Breakworld, the planet that the alien invader Ord came from. What is worse is that since the inhabitants of the Breakworld has learned about Colossus’ destiny; they plan on destroying the Earth by firing a giant bullet towards the Earth! Can the X-Men stop the bullet from hitting Earth and will all of the X-Men members make it back alive? Read this volume to find out!

Joss Whedon’s writing: As always, Joss Whedon really knows how to weave a brilliant story with even more memorable characters to match! I loved the way that Joss Whedon truly makes this volume dramatically climatic as the story got more interesting and intense as it went on and I was on the edge of my seat trying to figure out how the X-Men would be able to stop the bullet from hitting the Earth. I also loved seeing the relationship between Kitty and Colossus become more serious and intimate in this volume as they truly care about each other and there is a really hot scene between the two lovebirds in this volume! I also loved the relationship between Emma and Scott and even they had their moments of doubt in their relationship and I thought that Joss Whedon had written that strain in their relationship extremely well. I also loved the fact that in the “Giant Size Astonishing X-Men One” which continues after the “Unstoppable” volume, we are introduced to other Marvel super heroes such as Spiderman, the Fantastic Four, Iron Man, Doctor Strange and many others and it was interesting to see them try to help out the X-Men in saving the world and I loved the jokes that Joss Whedon provided for Spiderman since it really fit his character. I also loved the humor that Joss Whedon incorporated into this volume as it made this final volume not only intense to read, but light-hearted in a way that will make you laugh so much at how the characters in this book took this worldwide threat in a more hilarious light. I especially loved the little quote that Colossus has when he attempted at making a joke at a serious situation:

Abigail Brand: “I’m assuming you’re as mystified by this as the rest of us, Rasputin.”

Colossus: “No. I’m not. I have been planning to destroy the Breakworld since I was a child.”
(silence)

Colossus: “This is why I don’t make so many jokes. I never know when is good.”

John Cassaday’s illustrations: John Cassaday’s illustrations are just are brilliant and gorgeous in this volume as it was in the first three volumes! I loved how all the characters have looks of shock and anger on their expressions when they found out the true scope of the plans for the Breakworld, especially Colossus’ shocked expressions when he realizes that he is the one destined to destroy the Breakworld. I also loved how John Cassaday did an excellent job at illustrating all of the other popular Marvel characters such as Spiderman and Iron Man coming together and the image of all the Marvel super heroes coming together in a space ship reminded me of DC comics “Justice League.”

Shadowcat (once again!): Joss Whedon has truly done an excellent job at portraying Kitty in this volume. I loved how she would try anything to save the world and how she was so brave and heroic throughout this volume because it really made her character truly stand out even more in this volume. I also loved her relationship with Peter as she truly cares about him and I loved the moments between them.

The only problem I had with this volume was how one of my favorite characters died. I will not tell you who die because that will spoil everything, but it is a character that I have grew fond of since I read this series and that character will be sorely missed.

Overall, “Astonishing X-Men: Unstoppable” is a brilliant conclusion to this fantastic run by Joss Whedon and X-Men fans will definitely savor this series for all time!