[BOOK REVIEW] The Fool and the Flying Ship by Eric Metaxas 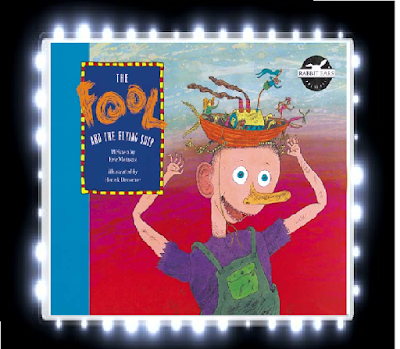 Title:  The Fool and the Flying Ship

Rabbit Ears have created a wonderful series called We All Have Tales. The series had released a number of wonderful stories from around the world, but The Fool and the Flying Ship remained as my all-time favorite Rabbit Ears story. This story is based on Arthur Ransome's classic Russian folktale, "The Fool of the World and the Flying Ship." Of course, this version is funnier and more modern than the original Russian tale, thanks to the Russian voice talents of Robin Williams.

This is my most favorite story from the Rabbit Ears series because it is extremely funny, witty, and entertaining at the same time. Eric Metaxas's writing is full of wit and humor and jokes that will have anyone laughing for a long time. My favorite part of the dialogue from this story was when the servant told the Tsar that there were peasants at the palace, but the Tsar thought that the servant was talking about pheasants. Robin Williams provided the voices for all the characters in the story in different Russian accents for each character, providing comedy relief from all characters. Also, I love the way how Henrik Drescher, the illustrator of this story, draws his characters with long and stringy limbs and weird attachments on their bodies, such as the Runner’s antlers on his head and the Sharpshooter’s popped out eyes.
The Klezmer Conservatory Band's wacky European music is full of jazz and folk-like music that gives The Fool and the Flying Ship a very wacky and over-the-top feel to the story.

I think this story is going to be a favorite among both the adult audience and the younger audience for all time because of the story's good humor and creative characters.

Does anyone notice that the Fool and Pinocchio almost look the same?