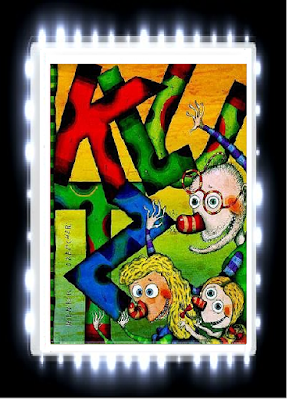 They are zany! They are clumsy! They are hilarious! They are the Klutz family coming your way! “Klutz” is a children’s book by Henrik Drescher and it is about how a clumsy family finally found their calling in life when they meet up with the circus. “Klutz” is easily one hilarious book that you cannot pass up!

Louise was always a klutz since her family was klutzes since the dawn of time. Every day, the Klutz family would trip over themselves; even in their own house and everyone they passed by would call them “Lumpish Yokels.” One night however, the Klutz family met up with Professor Squirmworm’s Magic Circus Caravan (after they literally crashed into it) and Professor Squirmworm decided to make them into clowns!

The only problem that some people might have with this book is that the images are little bit too surreal for some people to handle. The Klutz family and practically every character in this book have sharp looking teeth and crazy looking eyes that might scare smaller children, so parents might want to read this book first to see if their children will handle it.

Overall, “Klutz” is a truly hilarious book for both adults and children who want to learn the importance of family and having some good old fun! I would recommend this book to children ages five and up since the images might be too surreal for smaller children to handle.