[BOOK REVIEW] The Many Sins of Lord Cameron by Jennifer Ashley 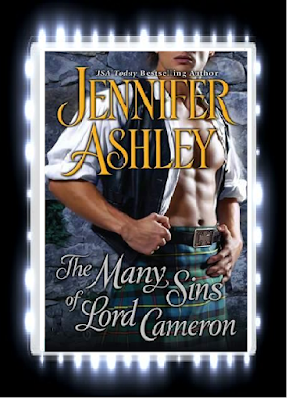 Title:  The Many Sins of Lord Cameron

Since last year in 2011, I have started reading Jennifer Ashley’s fantastic “Highland Pleasures” series beginning with “The Madness of Lord Ian Mackenzie” and ever since then, I have fallen in love with this fantastic series!  Now, I have currently read the third book in the “Highland Pleasures” series which is called “The Many Sins of Lord Cameron” and it is easily the best story in the series so far!  “The Many Sins of Lord Cameron” has loads of action, heartwarming moments and hot romance that every romance fan will definitely gush over for many years!

Six years ago, a young Cameron Mackenzie meets up with a young woman named Ainsley Douglas and even though they tried to make love to each other that day, Ainsley could not finish it because she was married to John Douglas at the time and did not want to betray him.  Years later, Ainsley Douglas is now a widow and when she meets up with the notorious Cameron Mackenzie again, Cameron decided that he will finish what was started between him and Ainsley six years ago.  However, Cameron and Ainsley will soon realize that dark secrets will be revealed and that their love for each other might ignite brighter than before!

Oh my goodness! This book was just absolutely amazing, heartbreaking and exciting all at the same time!  Jennifer Ashley has certainly woven a truly brilliant and heartwarming story about two lovers who both have dark secrets in their pasts, but are willing to put the past behind them in order to obtain true love!  I just loved all the characters in this book and Jennifer Ashley has done an awesome job at crafting each character’s personalities to make every one of them stand out.  I especially loved Daniel Mackenzie, Cameron’s son, who was always trying to bring Ainsley and Cameron together while providing good humor for the story.  It was amusing seeing how Daniel always seems to know what is best for his father and Ainsley while he is always doing the opposite of what his father tells him to do.  I really loved the awkward relationship that Daniel shares with Cameron because it brings so much humor to the story, especially with Daniel just randomly spewing out secrets that his father never told anyone.  Now about the two main characters, Ainsley Douglas and Cameron Mackenzie, they were probably the greatest couple I have ever read about in any romance novel!  Ainsley Douglas is shown to be a strong and crafty heroine who does not let anything get in her way of her love for Cameron and it was hilarious seeing her constantly pick locks to get into other people’s rooms.  I also loved the way that Ainsley was trying to help Cameron overcome his inner demons that dealt with his late wife, Elizabeth and the things that Elizabeth did to Cameron were just too horrible to describe.  This truly shows that Ainsley really cares about Cameron and was willing to put her own desires on the side to be with Cameron.  Cameron Mackenzie is probably my favorite hero at this moment because he is so dark yet handsome and that really made his character truly interesting!  I also loved the way that Jennifer Ashley describes Cameron’s body being a body of “God” as he is truly large and muscular and tall! But what truly touched me about Cameron’s character was with his dark and frightening past.  It was sad seeing Cameron being so distrusting of women because of what his late wife, Elizabeth did to him all those years and I really felt sympathy for Cameron.  Bringing out Cameron’s dark past and his sadness over it has really brought out a new dimension to Cameron’s character by making him somewhat vulnerable, but still trying to overcome that fear that he has been holding up for many years.  I really loved the love shared between Cameron and Ainsley as it was genuine and sensual at the same time that I was literally anticipating the next scene of them loving each other!

Overall, “The Many Sins of Lord Cameron” is easily one of the best books out of Jennifer Ashley’s “Highland Pleasures” series and I am definitely looking forward to reading Hart’s book, “The Duke’s Perfect Wife.”