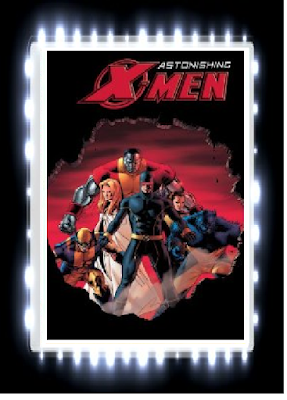 Content Rating:  Ages 15+ (Violence, Some Scary Imagery and Death of a Child)

After reading the first volume, “Astonishing X-Men: Gifted,” I just could not wait to read the second volume in this fantastic series, “Astonishing X-Men: Dangerous!” Joss Whedon and John Cassaday has once again woven a truly interesting story that is way more intense than the first and is full of shocking surprises that will leave every X-Men fan shocked for the rest of their lives!

After the events of the first volume “Astonishing X-Men: Gifted,” a young student named Wing had lost his mutant powers when Ord, the alien invader in the last volume, took away his powers using the mutant cure. Unfortunately, because of this, Wing has decided to commit suicide…in the Danger Room! This then causes a strange and horrific occurrence at the Xavier Institute as a giant damaged Sentinel starts attacking the X-Men and the Danger Room starts haunting all the students at the Institute! Who is this mysterious being who is causing trouble at the Institute? Read this volume to find out!

Joss Whedon’s writing: Once again, Joss Whedon has astonished me again by writing a truly creepy yet exciting sequel to this fantastic series! Joss Whedon’s writing is full of shocking surprises that really shocked me to the core, especially towards the end when it is revealed who is controlling the Danger Room! It was interesting seeing the Danger Room turn against the X-Men and I loved how Joss Whedon incorporated some of the horror elements from “Buffy the Vampire Slayer,” such as monsters and living corpses, into this volume as they made this volume such a shock to read through.

John Cassaday’s illustrations: John Cassaday’s illustrations are simply amazing in this volume and I loved the way that he drew all the monsters in the Danger Room as they all look so creepy and realistic that I was literally on edge when I looked at the illustrations! I also loved all the characters’ appearances, especially Peter and Kitty’s appearances because they look so lovely together and their facial expressions are always drawn so realistically that I often find myself either sympathizing or rooting for the character.

Peter and Kitty’s Relationship: I just love this couple to death! Peter Rasputin and Kitty Pryde are the perfect couple for each other as they stand by each others side during battle and I just loved the little private conversation that Peter and Kitty have about what happened at Genosha because it showed how much Peter truly cares for Kitty’s feelings and how he wanted to protect her at all cost. I just thought that was the most romantic scene in this entire book (coming from a romance novel fan!)

Be forewarned that there are some images in this book, mainly the appearances of the monsters that show up in the Danger Room, that will make your skin crawl, it certainly made my skin crawl and it was hard for me to sit through some parts of this book without my skin crawling. Also, the reason why I gave this a four star rating instead of a five star rating is because while this book was really interesting to read, I thought that it steered too far from the original plot of the first volume as it just jumps from the plot about an alien invader coming to earth to the X-Men trying to fight the Danger Room. This would usually lead me to wondering what is actually going to happen next and why we are off topic from the main plot and it also confuses me so much that I often cannot concentrate too much on the story at hand.

Overall, “Astonishing X-Men: Dangerous” was a great read and I am definitely looking forward to reading the third volume in the series “Torn” next!