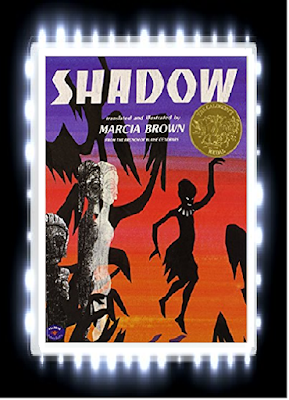 “Shadow” is a Caldecott Medal award winning book by Marcia Brown and it is about what shadows do around people and what they do when they are not looking.  “Shadow” may be a bit scary for smaller children, but it is truly a mesmerizing book that children would enjoy for many years.

Marcia Brown has wonderfully given a vivid description of what shadows do and what they are like and put the description of shadows in a poetic format and Marcia Brown does a great job at making shadows seem so mysterious as they constantly follow people around in ghostly figures.  Marcia Brown’s illustrations are truly eerie yet creative as the people in the book are drawn as black shadows while the shadows themselves are drawn as white ghostly figures following the shadowed characters, however, there are some shadows that are dark figures such as the shadow coming out of the ash from the fire.  The images perfectly blend color and black and white to bring out a more effective look at the world of shadows such as putting shadowed figures against colorful mountainsides or forests.

Parents should know that there are some scary images in this book which involves images of the shadows taking frightening shapes such as one shadow wearing a very frightening mask and another large shadow that has ash for eyes and is walking on four wobbly legs.  Many small children would also be frighten about the idea that shadows can come to life when they least expect it and it might cause many small children to not go to sleep at night because they might be afraid of their shadows coming to life to get them.  Parents need to explain to their children that shadows do not come alive and they are apart of people.

“Shadow” is a brilliant book that takes on the views of the mysterious world of shadows and it will have many children mesmerized for many years.  I would recommend this book to children ages six and up since the images are truly frightening and smaller children might be frightened at the idea that shadows come to life in this book.