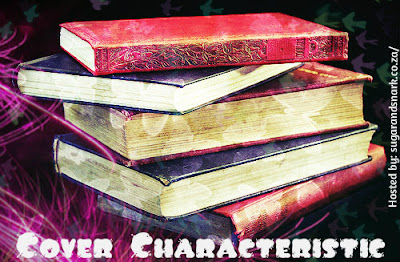 Hey everyone! This is a meme that was created by the folks over at Sugar and Snark called "Cover Characteristic" and here are the rules for this meme:

This week's theme is: ELEPHANT(S) AND NEW YORK CITY! 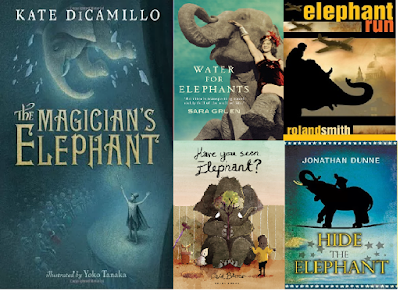 1.  The Magician's Elephant by Kate DiCamillo :  This is my cover of the week as the image of the elephant floating in the air looks so magical and beautiful!2.   Water for Elephants by Sara Gruen :   I just loved the image of a circus girl riding on an elephant. It looks so adorable! 3.  Elephant Run by Roland Smith :   This cover looks so intense with the planes coming down towards a city and the shadow of an elephant covering the scene!4. Have You Seen Elephant? by David Barrow :  This is such a cute cover of an elephant hiding behind a small tree while a little boy is looking for him!5.  Hide the Elephant by Jonathan Dunne :  The image of an elephant tight roping was highly creative and awesome to look at! 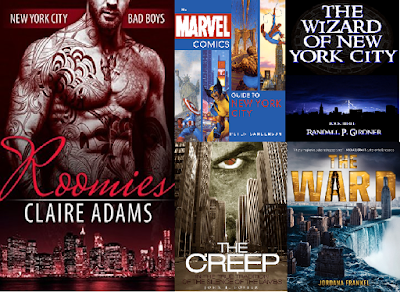 1.  Roomies by Claire Adams :  Even though this was a tough pick this week, this ended up being my cover pick of the week as I always love covers with sexy men on it and the fact that this male is hovering over New York City really makes this cover awesome to look at!2.  The Marvel Comics Guide to New York City by Peter Sanderson :  As a huge Marvel fan, seeing various superheros at different locations in New York City is a real treat to see! 3.  The Wizard of New York City - Book 3 by Randall Girdner :   I just love how ominous this cover looks with New York City being in shadows while a lightning storm hovers over the city!  4. The Creep by John T. Foster :  Another ominous cover with a large menacing eye overlooking New York City that send shivers through my spine!5.  The Ward by Jordana Frankel :  This was the other cover that I wanted to choose for my cover of the week, except that I also loved the cover of "Roomies" and I had a hard time trying to choose which one of these covers should be the cover of the week, but I ultimately went with Roomies.  The fact that you see New York City being flooded was gorgeous to look at!