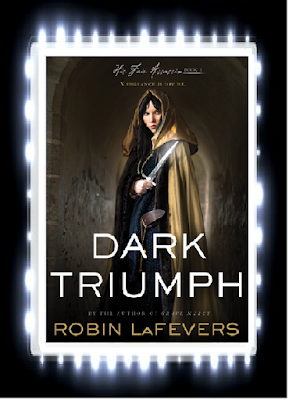 “Hate cannot be fought with hate. Evil cannot be conquered by darkness. Only love has the power to conquer them both.”

I must admit that it has been awhile since I had last read Robin LaFevers’ hit novel “Grave Mercy.”  However, years later I finally read the sequel of this fantastic series called “Dark Triumph” and I must say that it was even more exciting and personal than “Grave Mercy” was!

When Sybella first arrived at the convent of Mortain, she was mad with grief as she used to live with her monstrous dictator of a father d’Albret and her brothers Julian and Pierre and her life there was full of misery and turmoil.  Just as Sybella was enjoying her life at the convent, her life takes a drastic turn as the abbess of the convent forces Sybella to go back to d’Albret’s kingdom in order to find a means to weaken the dictator during Brittany’s war with France.  When Sybella founds out about this mission, she becomes truly heartbroken and she starts doubting the existence of Mortain as she wonders to herself about why would Mortain force her to go back to a life of pure misery with d’Albret?  It was not until later on when Sybella meets up with one of d’Albret’s prisoners, a huge and ugly man called Beast who is a loyal servant to the duchess of Brittany and a pawn that d’Albret wishes to use against the duchess.  When Sybella meets up with the prisoner, she decides to free him in order to prevent d’Albret from using him against the duchess and the two make their way towards the kingdom of Brittany to turn the tides in the war against France and d’Albret himself.  But, Sybella will soon realize that she may have feelings for Beast and that might turn the life that she has known all her life upside down.

Wow!  Even though I had enjoyed reading Robin LaFevers’ “Grave Mercy” novel, I never would have thought that I would enjoy the sequel “Dark Triumph” even more than “Grave Mercy!”  I loved the way that Robin LaFevers made this sequel much darker and more personal than the first book as readers are introduced to Sybella’s side of the story and how her life was full of turmoil and betrayal that made her doubt her existence in the world and how Mortain would allow her life to become so turbulent.  I really enjoyed seeing the character development that Sybella goes through in this book as she had an extremely miserable life with her treacherous family and I actually felt bad for her during the moments where she starts doubting her existence in the world due to certain circumstances not going her way.  I also enjoyed seeing the relationships that Sybella had developed over the course of the story, especially her relationship with Ismae, as they shared a sisterly bond that kept them close to each other and I like the way that Ismae tries to comfort Sybella during her times of stress.  But the character I was the most interested in was Beast himself as he has many similarities to Sybella (both love to fight off the bad guys and both had lost people that they cared about) and yet, he still retains a happy and go lucky attitude during the whole ordeal with d’Abret and the French.  But, I cannot leave out one of my most favorite aspects of Beast’s character and that is (seriously) his BODY TYPE!  I like the fact that we have a hero who is described as not being handsome looking, but still has an extremely muscular body that is able to take down any forces that come up against him and it is this description of Beast that makes me really fall for him!

For those of you who do not like suggestive themes and strong violence, there are some surprisingly violent moments in this book which includes many characters getting their throats slit by the assassins that might be uncomfortable for some readers.

Also, the fact that Sybella’s family, her brother Julian and d’Abret included, seem to want to get into a sexual relationship with her, despite the fact that they are “related” to each other and that might be a bit upsetting for some readers to handle, especially since it shows that Sybella clearly does not want to engage in such relationships with her brother Julian and d’Albret and they were basically forcing themselves upon her.

Overall, “Dark Triumph” is a truly fantastic sequel to “Grave Mercy” that fans of historical romance and books that deal with assassins will definitely enjoy for many years!  I am definitely looking forward to the third book in the series “Mortal Heart!”