[BOOK REVIEW] Garfield Gets in a Pickle by Jim Davis 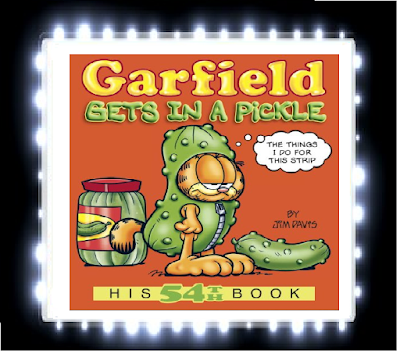 Title:  Garfield Gets in a Pickle

Jim Davis’ writing: Jim Davis’ writing continues to be as witty and hilarious as the previous volumes and even though Garfield and his family are still in the same situations we usually see them in (Garfield dealing the mice and spiders, Jon and Liz going out on dates, Garfield picking on Odie), the writing continues to be entertaining to read and I still enjoy seeing these adventures that Garfield, Jon, Odie and Liz continue to get into!  I also loved the fact that Liz is usually the voice of reason to Jon’s bizarre mannerisms and Garfield still continues to snark about Jon and Odie’s buffoonery as it is great seeing these two sane characters trying to deal with the humorous chaos going on around them.

Overall, “Garfield Gets in a Pickle” is another brilliant collection of “Garfield” strips that fans of the “Garfield” series will greatly enjoy!