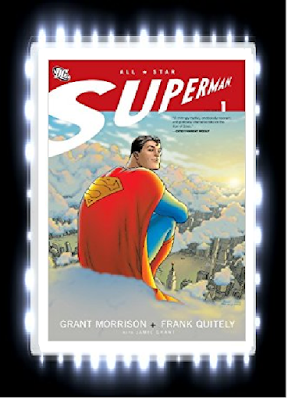 Now, I have a little confession to make (I seem to be making so many book confessions lately, right)?  I had only read a few “Superman” comics over the years, which included “Superman: Whatever Happened to the Man of Tomorrow” and “Superman: Secret Identity.” The reason why I have not read that many “Superman” comics was not because I hate Superman (I actually really like his character), but it was hard for me to look for some recommendations for good “Superman” stories while recommendations for good “Batman” stories came much more readily.  One of the “Superman” stories that was always highly recommended to me was Grant Morrison’s run on “Superman” called “All-Star Superman.” At first, I was a bit hesitant about checking this series out because from what I had heard from some comic book fans, Grant Morrison’s works tend to jump off the deep end at a certain point in his stories and I had experienced that with his work on “Batman R.I.P.”  However, after I finally decided to dive into this graphic novel, I now see why this particular graphic novel was so highly recommended to me and I have to say that “All-Star Superman Volume One” is one of the best “Superman” stories I had ever read!

The story starts off with Superman going to the sun to rescue a space crew who were on a mission to take fire from the sun and it turns out that because Superman went too near the sun, he contracted apoptosis, death of the body cells, which means that he will soon die.  When Superman finds this out, he decides that he must do some things on Earth before he dies, such as temporarily giving his love interest Lois Lane superpowers for her birthday and trying to confess his secret identity to her, getting in a fight with Jimmy Olsen due to being affected by Black Kryptonite, meeting up with his nemesis Lex Luthor, and saying his goodbyes to his father Jonathan Kent.

Will Superman have time to do all of these things before he dies?

Read this graphic novel to find out!

Grant Morrison’s writing: I really enjoyed Grant Morrison’s writing in this graphic novel as the story has a nice mixture of drama and humor thrown in and I often found myself laughing at some of the situations in this volume, such as Superman and Lois’ encounter with the comical superhero duo Samson and Atlas.  I also like the fact that this story tackles the subject about what would happen if Superman is about to die and how he would spend his last days on Earth (although, the concept about Superman dying is nothing new at this point).  This gives Grant Morrison a chance to explore Superman’s life from his arrival to Earth and being adopted by Jonathan and Martha Kent to working in the Daily Planet and meeting Lois Lane and there is a great love to the character as not only do older readers get to see Superman’s life be presented again in this volume, but new readers will be able to understand more about Superman’s origins through a modern interpretation.  I also enjoyed the way that Grant Morrison portrayed Superman in this volume as Superman is not shown as being a flat character, but has many dimensions to his personality as we get to see Superman become sad, happy, angry and humorous all at once in this volume; it was fantastic seeing the various emotions that Superman displays in this volume contribute to the story at hand.

Frank Quitely’s artwork:  While there are some parts of Frank Quitely’s artwork that annoyed me a bit, which I will discuss more about in the cons section, overall, the artwork is extremely detailed and gorgeous to look at.  Probably my most favorite image in this graphic novel was the image of Superman and Lois Lane kissing each other on the moon and you can see the gorgeous detail being done to Lois’ wavy hair as it is waving around in space.

The only problem I have with this graphic novel is that there are so many things happening in the story that it would make it pretty confusing for anyone who is not used to reading “Superman” comics.  Even though I found this graphic novel to be pretty entertaining, the narrative can get overcrowded at times because there are so many events going on and you have to read each issue a bit carefully to get the full details of each of the stories.  Also, some of the artwork can be a bit off at times, especially with the way that Superman’s face seems to look like dough in some panels and I felt that he was drawn a bit too bulky in this volume, despite the fact that Superman is naturally muscular.

Overall, “All-Star Superman Volume One” is seriously one fantastic and hilarious volume that I would love to read over and over again if I get the chance to and I cannot wait to read the second volume of this series!