[BOOK REVIEW] Arrow to the Sun by Gerald McDermott 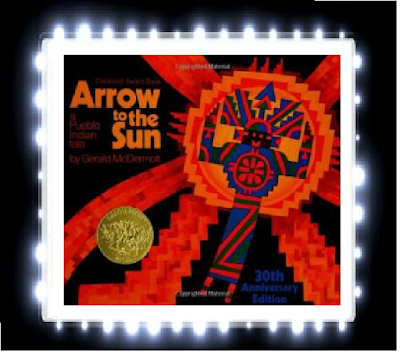 Title:  Arrow to the Sun

“Arrow to the Sun” is a Caldecott Medal Award winning book by Gerald McDermott that relates an old Pueblo Indian tale about a boy who tries to find his father, the Lord of the Sun and prove himself worthy to be his son.  “Arrow to the Sun” is a fun and creative book that many children who love Native American folktales, will easily get into!

Gerald McDermott has done many wonders with both the illustrations and the writing.  Gerald McDermott makes the story dramatic and simple at the same time as the writing is often shown on one side of the page and the other side of the page contains mainly images and many children who are adopted can easily relate to the boy as he tries to find his real father and many children can sympathize with the boy as some children might feel like they have to find their real parents to find out about their real heritage, so this story is similar to an adoption story for children who were often adopted and they want to learn more about their real parents.  Gerald McDermott’s are extremely colorful as they show all the colorful vibes that you would find in a 70s show as this book was made during the 70s and the illustrations are also highly creative as the characters are all block shaped and there is no real figure to the characters to identify them as human beings as they look like blocks rather than human beings.  The image that stood out the most was the image of the boy being turned into an arrow and being shot out into the heavens towards the sun and you can see that the stars also look block shaped but are also done in rainbow colors making the illustration look truly magnificent.

“Arrow to the Sun” is a brilliant folktale about the power of courage and determination and many children who love hearing various folktales from the around the world will definitely love this book.  I would recommend this book to children ages four and up since there is nothing inappropriate in this book unless smaller children might worry about the boy’s misfortune with the other boys for not having a father in his life.