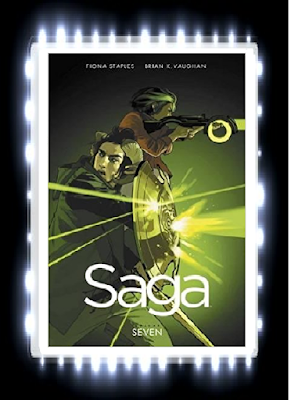 Oh, my goodness!  How long has it been since I last read “Saga?”  Too long, I say!  TOO LONG!!!  Anyway, I finally got around to reading the seventh volume in Brian K. Vaughan’s and Fiona Staples’ AWESOME and BRILLIANT “Saga” series and oh man, do I DARE say that this volume has gotten me into TEARS in the worst way possible?

In this volume, Marko, Alana and their daughter Hazel are finally reunited with each other after spending the previous volumes being apart from each other.  When the ship they are using runs out of fuel, Marko, Alana and their new friend Petrichor and Prince Robot have to go to a planet called Phang to get the fuel they need for their ship.  But, Phang is a planet that is ravaged by the war between Wreath and Landfall and they ended up meeting a family of refugees who ended up staying with Alana, Marko and their crew for a while.  Unfortunately, it turns out that the planet Phang is actually about to be destroyed and Alana, Marko, Hazel and their friends have to figure out a way to escape the planet before it is too late!

Brian K. Vaughan’s writing:  Oh, my goodness!  I just can never get enough of this series!!! Brian K. Vaughan has once again done a brilliant job at writing this volume as this volume was full of humor, drama, and tear jerking moments that will make you cry for days!  I loved the way that Brian K. Vaughn wrote the characters as I found myself really caring for the characters’ situations, especially with Alana being pregnant again and trying to keep her baby safe while surviving on a war-torn planet.  I am always amazed at how Alana and Marko managed to survive their dangerous journey in going to a peaceful planet while also having a family at the same time as it shows how strong their family is and I always loved the fact that whenever a new person comes on board their ship, they are automatically considered family.  I really liked the way that Hazel is growing up in each volume as she slowly tries to understand about the world around her, while still being the most innocent character in this series and she is always bringing in some lightheartedness to the story.  I also liked the way that Brian K. Vaughan approached the subject about what refugees have to go through whenever they are stuck in a war-torn city as I found myself sympathizing with the refugees that Alana and Marko took in and how they lost everything due to a war going on in their homeland.  I liked the fact that Brian K. Vaughan pulled no punches in this volume as there were many character deaths and intense situations that had left me shaken and it seems like with each volume, things get even more dangerous and intense for Marko and Alana and I just hope that they along with Hazel survive the dangerous journey.

For anyone who does not like strong language, there are some usages of the “f” and “s” words that are littered throughout this volume.  Also, there is some nudity in this volume (although not as much as previous volumes, which is saying something). So, if you do not like seeing (pardon my speech) penises or nipples, then you might want to skip over these scenes.  There are some gory scenes in this volume also, such as images of people’s heads getting blown up.  So that might unsettle some people who do not like gory violence in graphic novels.

Overall, “Saga Volume Seven” is a truly FANTASTIC and TRAGIC volume that everyone who is a fan of Brian K. Vaughan’s famous “Saga” series should definitely check it out!  Now, I am off to check out the eighth volume in this series!