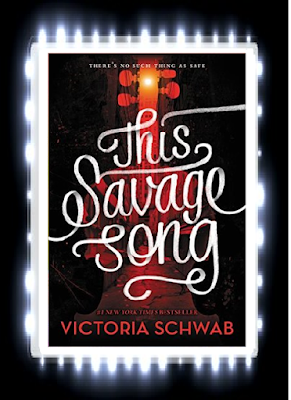 Now, I have been hearing so many good things about Victoria Schwab’s popular “Monsters of Verity” series and I just had to pick this series up as soon as possible!  So, the first book in the series is “This Savage Song” and it was so beautifully written by Victoria Schwab that I just immediately fell in love with this book!

The city of Verity is in the middle of a war between the monsters and the humans, as monsters such as the Corsai, Malchai and the Sunai, are plaguing the city with violence and death.  The humans, on the other hand, are trying to protect themselves against the monsters and are living every day in fear.  Overseeing the city of Verity is a man named Callum Harker, who is the most powerful man in the city and he promises to protect the humans against the monsters if they pay him for his help in taking down the monsters.  On the other side of the city, a man named Henry Flynn rules the part of the city that Harker has no control over and he also tries to protect the people of Verity from the monsters plaguing the city.  But, he is up against Harker and the two are at war with each other to see who will take over the city of Verity.  Kate Harker had just recently been kicked out of her most recent school for trying to set the building on fire and she returns to Verity to prove to her estranged father, Callum Harker, that she can be just as ruthless and merciless as him and has decided to attend Colton Academy to be closer to her father.
However, while at the academy, Kate encounters a shy and awkward boy named August Flynn, who is actually undercover by orders of Henry Flynn, to spy on Kate and see if they need to use her for leverage against Harker.  Also, August harbors a secret that Kate does not know about:  he is actually a Sunai, a monster that can suck out the souls of the people who have sinned and he uses his violin as a way to bring out the people’s souls so he can devour them.  In order to fit in the school, August must keep his true identity a secret from the other students, including Kate, who he slowly starts to develop a bond with.  In a city that is wrecked by war, August and Kate must find a way to survive in this war-torn town while trying to understand each other better.

Wow!  Double, DOUBLE wow!  I never would have thought that I would love this book so much when I read it for the first time!  Victoria Schwab’s writing was so beautiful and intense that I found myself being enthralled by the haunting yet amazing world that the story takes place in!  I loved the way that Victoria Schwab created the world of Verity as it is a truly frightening place, especially with the monsters constantly running amok the city and killing many innocent people without warning.  I liked the fact that this book can be really scary at times, especially during the scenes where August is having trouble controlling his powers and you cannot help but feel a sense of unease as you wonder if he will hurt Kate if his powers get out of control.  I liked the way that Victoria Schwab wrote all the characters in this book as each character is holding a dark secret that the reader does not know about until the very end of the book and Victoria Schwab does a great job at building up the mysteries surrounding each character.  Out of all the characters in this book that I enjoyed the most, they were, of course Kate and August themselves!   I liked the fact that Kate was an anti-hero in this story and that she was acting a bit ruthless throughout the story because it is rare to see the protagonist of the story be so ruthless, even when we found out that it is because she just wanted her father to notice her.  I also loved August as he is the opposite of Kate as he is actually polite and shy, in contrast to Kate’s more aggressive personality and the fact that he is struggling with controlling his monster side makes him into such an interesting character!  I especially loved the relationship between Kate and August as they are more like friends in this book than lovers as it is rare for me to read a book where the main protagonists are just friends and I enjoyed the bonding that Kate and August have once they get to know each other better.

For anyone who does not like strong language, there are a couple of words like the “f” word and the “s” word being thrown around in this book that might offend some readers.  Also, there is some gory violence in this book as characters are stabbed or cut up in a graphic manner that might be disturbing to some readers.

Overall, “This Savage Song” is a truly brilliant book about true friendship, music and horror that fans of these type of books will definitely enjoy!  Now, without a further ado, I am off to read the second book in the series “Our Dark Duet!”