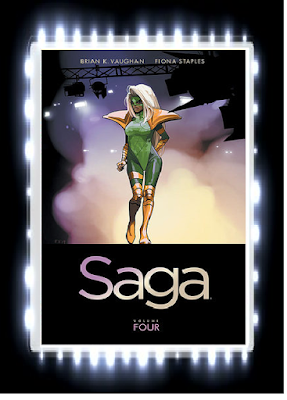 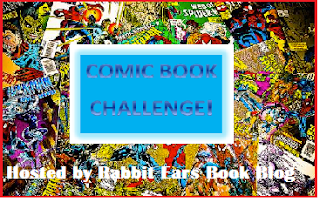 It is finally here! I finally got the chance to check out the newest volume in Brian K. Vaughan’s “Saga” series and it was amazing!  I am seriously going to be gushing over just how awesome this volume was compared to the previous three volumes!

Marko and Alana finally landed on the planet Gardenia in order to start a new life with their daughter Hazel, who is now a toddler at this point.  Alana even got a new job as a TV Action Star; but unfortunately, things are not turning out well for the two lovers.  First of all, Alana’s new job is causing her to spend less time with her family, which is causing Marko to get irritated by all this. Secondly, Marko appears to have met a friendly dance teacher, which he starts spending some time with while Alana is away, so you can imagine where all this is going… Meanwhile, Prince Robot IV’s son is finally born, despite the fact that Prince Robot IV is away somewhere around the galaxy and his wife continues to wait for his return.  Everything seems all well and good, right?  WRONG!  Now it appears that a lowly janitor named Dengo has kidnapped Prince Robot IV’s newborn baby and is planning an all-out war against his own planet!

Brian K. Vaughan’s writing: Wow!  I must admit that I have always been pleasantly surprised with how Brian K. Vaughan’s “Saga” series is progressing in each of these volumes, but I never would have thought that I would read a volume that has so many shocking twists and turns all at once!  Brian K. Vaughan, as always, has done an excellent job at writing this story as I really enjoyed seeing Alana and Marko’s relationship with each other develop even further and it was great seeing Hazel growing up as a toddler in this volume.  I was also impressed with how many twists and turns Brian K. Vaughan brought to the plot of this volume as many of the situations that happened were extremely shocking to me!  I mean, who would have thought that Alana and Marko would actually be seen fighting with each other (verbally, of course) and who would have thought that Prince Robot IV’s newborn son would be kidnapped?  These were twists that really made the story interesting for me and I was hoping that everything would turn out alright for everyone as the series progresses!  I also loved the snarky humor that Brian K. Vaughan incorporated into this volume as I loved hearing everyone comment on various situations that they are currently in, especially from Klara the ghost girl!

Fiona Staples’ artwork:  Fiona Staples’ artwork is as usual gorgeous to look at, especially of the images of laser beams and explosions as they look so effective in the artwork.  I also loved the way that Fiona Staples drew each character from different planets, such as seeing images of alligators being nurses, a tree like creature who works at the TV station and of course, the royal robot characters with TV sets for heads.

The reason why I took off half a point from a six star rating (this story is still a five star read, but I usually give the “Saga” series six stars for being so good), was because the first half of the volume was a bit weak in developing the situations for the characters and it did felt like I was waiting for a long time for the actual story to get going (and the actual story did not actually get going until the second half of the volume).  Also, this volume has a lot of gory scenes and strong language that might not go over well for some readers.

My overall verdict for “Saga Volume Four” is…GO AHEAD AND BUY IT!  You will not be disappointed with this installment in Brian K. Vaughan’s “Saga” series and I definitely cannot wait until the fifth volume comes out!