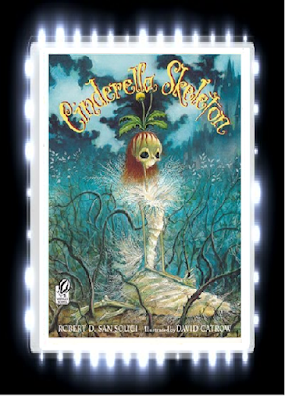 Robert D. San Souci has done a terrific job at retelling this classic fairy tale in a more Halloween spirited tone as all the characters in this book are skeletons and monsters instead of human beings that the original story portrayed, which makes this book extremely creative to read since it is Halloween themed. Robert D. San Souci makes the story perfectly spooky yet creative as the story is told through a rhyming prose while using such effective words such as “mausoleum” and “bombazine” to describe the haunting world that Cinderella Skeleton lives in. David Catrow’s illustrations are delightfully creepy yet beautiful at the same time as the world around Cinderella Skeleton is dark and bleak and Cinderella Skeleton herself is beautiful (as opposed to the dark world she lives in) as she wears a white torn silk dress that looks like it is made of spider webs which makes her look hauntingly elegant. Also, the image of Prince Charnel himself is somewhat frightening yet he has a handsome physique and he wears a soldier’s uniform that is covered with roaches and he carries a large red, white and black striped snake around the left side of his shoulders, giving him an elegant yet eerie appearance.

Parents should know that there are some genuinely frightening images in this book such as the images of the various monsters that attend the Halloween Ball as some of them have eyeballs missing from their heads and even the skeleton characters look somewhat frightening as they have holes in their eye sockets that look empty and eerie. Another image that might scare smaller children would be the image where Cinderella Skeleton losses her foot at the ball (even though she is a skeleton) and small children might worry that they might lose their feet too. Parents might want to read this book first before they show it to their children to see what their reactions are to such haunting images.

“Cinderella Skeleton” is a truly uplifting and haunting retelling of the classic fairy tale that many children will love for a long time. I would recommend this book to children ages six and up due to the frightening images and some complicated words like “mausoleum.”