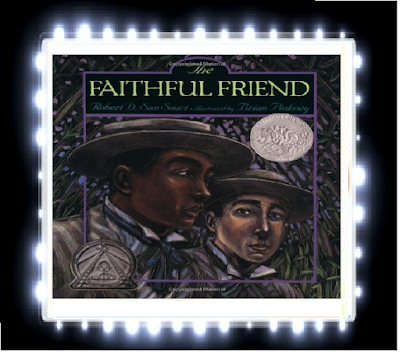 “The Faithful Friend” is a Caldecott Honor Book and a Coretta Scott King Award winning book from master storyteller, Robert D. San Souci along with illustrations by Brian Pinkney.  This story is about how Hippolyte, a faithful friend of Clement, tries to save his friend from the misfortune that occurs to him when Clement tries to marry Pauline.  “The Faithful Friend” is definitely one of the greatest books about friendship ever written for children.

Robert D. San Souci has done a fantastic job at writing this book as it is based off the classic Brothers Grimm tale, “Faithful Joannes.”  Robert D. San Souci has successfully delivered the message about how a true friend will help a friend in their time of need as Hippolyte stayed loyal to his friend Clement in order to protect him from the evil Monsieur Zabocat.  Brian Pinkney’s illustrations are truly magnificent as the characters seem to glow in every page and even though the characters have some scratchy edges to their structures, they look extremely realistic and colorful that will mesmerize children to no end.  The images that stood out the most in this book was the image of Pauline, Clement and Hippolyte leaving Monsieur Zabocat’s plantation in the middle of the night as the sky is clear blue and the characters effectively glow against the small moon in the image.

“The Faithful Friend” is the perfect for children who want to learn more about what it takes to be a true friend and who loves romance.  I would recommend this book to children ages six and up since the book is a bit too long for smaller children to handle and there are some Caribbean words such as “Bonjou” and “quimboiseur” that younger children would have trouble understanding.