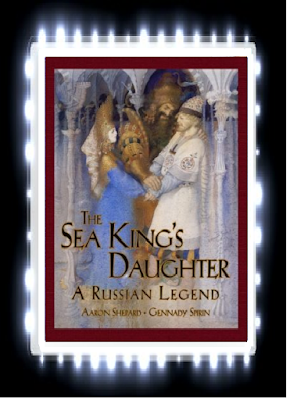 I would like to thank NetGalley and Skyhook Press for providing me a copy of this book in exchange for an honest review.


I have always loved reading Russian folktales and when NetGalley offered the timeless classic “The Sea King’s Daughter” by Aaron Shepard along with gorgeous artwork by Gennady Spirin, I was so excited to check this little baby out and I was not disappointed by the results!

Once upon a time, in the city of Novgorod the Great in Russia, there lived a poor but contented musician named Sadko, who would usually play his twelve string gusli during various parties that he was invited to.  Everyone at the parties would happily dance to his music and Sadko was content in learning that his music was causing so much joy for the people of Novgorod!  One day however, Sadko wanted to find a wife, but none of the Maidens at the parties would marry him due to him being poor.  So, when Sadko started playing his gusli over the River Volkhov, the mighty Sea King suddenly popped out of the ocean and invites Sadko to play at his underwater palace.  Sadko decides to go to the underwater palace, but once he gets there, the Sea King offers Sadko a chance to marry one of his daughters and stay in his kingdom forever.

Will Sadko marry one of the Sea King’s daughters and will he ever return back to his home in Novgorod?

Wow!  I was quite impressed with this book, especially with the numerous nods to Russian culture displayed in the story!  I loved the fact that Aaron Shepard incorporated many Russian elements in this story as we get to see the various instruments that are shown in Russia such as Sadko’s gusli and I also loved the fact that the story uses the themes of dancing and music to be a major factor in Sadko’s life and how they affect his decisions to make a happier life for himself.   I also loved the dilemma that Aaron Shepard brings to the story as Sadko has to decide if he wants to stay in the Sea King’s palace and marry his daughter or not marry the Sea King’s daughter and stay in his hometown Novgorod as it provides an interesting situation for Sadko and the reader is free to engage in deciding which decision will make Sadko happy.  But my most favorite part of this book was the artwork done by Gennady Spirin as the artwork was simply gorgeous to look at!  I loved the images of the citizens of Novgorod dancing to Sadko’s music as the citizens just look so cheerful whenever they are dancing and the artwork seems to glow off the pages as you see the people dancing!  I especially loved the way that Gennady Spirin designed the underwater palace of the Sea King as it looked truly exquisite and beautiful and I enjoyed seeing the images of various underwater creatures like fish and crabs occupying the underwater palace.  But what I loved the best about Gennady Spirin’s artwork were the exotic Russian clothing that the characters wore in the story as I often wanted to wear such clothing and it really brings out the Russian elements of this tale!

The reason why I took off half a star from the rating was because I felt that the story was slowly paced and it was sometimes hard for me to get completely engaged in the story because some scenes seemed to drag out too long.  Also, for anyone who does not like bittersweet endings in stories, this story does have a bittersweet ending.  I will not tell you what happens at the end, but I must admit that I found myself a bit unsatisfied with how abrupt the ending seemed to be.

Overall, “The Sea King’s Daughter” is a truly great book about finding your true happiness in the world and anyone who loves Russian folktales will definitely enjoy this story!  I would recommend this book to children ages six and up since the length of the book might be too long for some smaller children to handle.