[ARC REVIEW] Lila and the Crow by Gabrielle Grimard 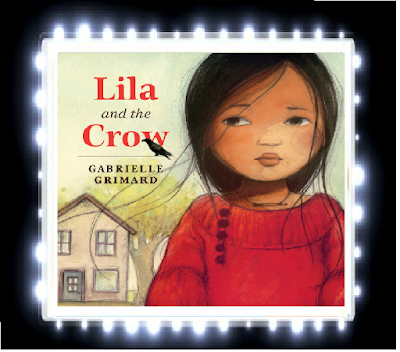 Title:  Lila and the Crow

I would like to thank NetGalley and Annick Press for providing me a copy of this book in exchange for an honest review.

After I finished reading “Lila and the Crow” by Gabrielle Grimard, I noticed that I had just read another bird themed book from the publisher Annick Press and that was “Rosie the Raven,” which I thoroughly enjoyed!  “Lila and the Crow” was a truly unique children’s book about the importance of accepting your own individual appearances no matter what other people say!

Lila had just recently moved to a new town and she wanted to make some new friends on her first day of school.  But when Lila comes to school, a boy named Nathan ends up making fun of her by saying that she looks like a crow and this causes the rest of the class to make fun of Lila too.  The next day, Lila tried to cover her hair since the other kids said that it was as dark as a crow, but then the other kids started saying that Lila has dark skin like a crow’s and they continued bullying her about her “crow” appearance until Lila had nearly covered up her whole body to avoid the bullying.  One day however, the school’s autumn festival had arrived and all of Lila’s classmates were excited to be wearing costumes during the event.  But Lila was still miserable from all the bullying she has received and when she finally hits her lowest point, a crow suddenly came up to Lila.  It turns out that the crow has been following Lila throughout the story and it was trying to tell Lila something, but Lila kept ignoring the crow throughout the story.  Now, Lila decides to give her attention to the crow and…

What is the crow trying to tell Lila?

Gabrielle Grimard has done a great job at telling this story as it details the upsetting effects that bullying has on people (especially children), while also teaching the readers about the importance of being yourself no matter what everyone else says about your appearance. Whenever I saw Lila getting bullied at school due to looking different from the other students, I felt a lot of emotion for her as I know how upsetting bullying can be for a child, especially if the child did not do anything that would warrant such cruelty.  I was amazed at how Gabrielle Grimard realistically shows the impact that bullying can have on a child as we see scenes of Lila trying to cover herself up to avoid the bullying and getting more miserable as the bullying worsens.  I was also intrigued about Lila’s relationship with the crows (even though not much was really explained about the context of their relationship) as it gave the book a supernatural feel as it seems like Lila is connected to the crows somehow and the crows really want to help Lila with her problems at school.  Gabrielle Grimard’s artwork is absolutely gorgeous to look at as Lila looks extremely unique from her classmates as she is mostly dressed in solid red colors while her classmates are in more colorful clothing.  I really loved the images of the crows and the forest life itself as it looks so exotic and I loved the way that the crows look  mysterious on each image as you are wondering what they want to say to Lila throughout the story.

The reason why I took off half a star from the rating was because I felt that the characters were a bit too flat, especially regarding Lila as we do not know why she moved from her old town or why the crows want to communicate with her.  I was also wondering about whether Lila was connected to the crows or not as it seemed a bit bizarre that Lila is the only person who can kind of communicate with the crows and it makes me wonder if Lila had any sort of special power that we should be aware of.