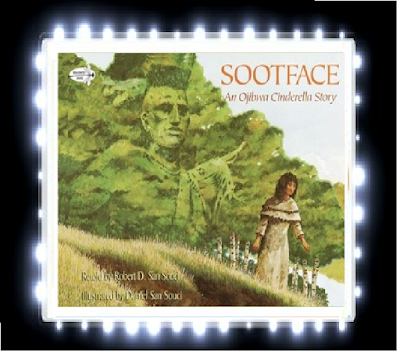 “Sootface: An Ojibwa Cinderella Story” is a brilliant Native American version of “Cinderella” retold by Robert D. San Souci along with beautiful illustrations by Daniel San Souci. In this version, a young girl named Sootface is mistreated by her two older sisters, but when a mighty warrior wanted to marry a woman who can see him when he is invisible, Sootface realizes that true beauty lies within. “Sootface: An Ojibwa Cinderella Story” is a beautiful retelling of one of the most beloved fairy tales ever created and will be an instant treat for children.

Robert D. San Souci has done a terrific job at retelling this old Native American tale as he makes the story both dramatic and tender at the same time. The audience can easily feel sympathy for Sootface as she has to endure hardship from her sisters and the village because of her appearance, however Sootface teaches children about the importance of having a kind heart as Sootface tries to overcome the cruelness of her sisters to have her dreams come true. Daniel San Souci’s illustrations are just simply beautiful and amazing as it truly captures the true spirit of the Native American culture as the characters wear colorful skin robes to define their personalities. The image that stood out the most was the image of Sootface herself as she definitely does look dirty since her hair is frizzy and her clothes are worn and torn since she has to do all the work at her home. However, Sootface still have an extremely beautiful face which strongly proves the book’s point in how true beauty lies within.

“Sootface: An Ojibwa Cinderella Story” is a beautiful retelling of “Cinderella” that many children who are interested in Native American folktales will enjoy for many years. I would recommend this book to children ages five and up since there are some terms in this book that younger children would have problems with.