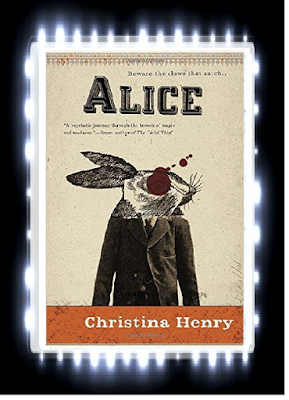 Series: The Chronicles of Alice #1

The story starts off with Alice being held in a hospital (or a mental institution) due to her going insane a few years ago and the problem with this is that Alice cannot remember how she ended up in the hospital in the first place.  The only bits of memories she has left is that she was having a tea party with a white rabbit and it turned out that the white rabbit had raped her after the party, but Alice had managed to escape the White Rabbit’s clutches.  Meanwhile, Alice meets up with a fellow male inmate named Hatcher, who was also suffering from amnesia and seems to be connected to a mysterious monster named the Jabberwocky.  Later on unfortunately, the hospital mysteriously burns down and Alice and Hatcher manage to escape from the burning hospital and it was then that they discovered that the Jabberwocky was responsible for burning down the hospital and it seems to be chasing after both Alice and Hatcher!  It turns out that Hatcher and Alice both have mysterious powers that could defeat the Jabberwocky, but in order to fully defeat the Jabberwocky, Alice and Hatcher must obtain a rare weapon that could destroy the Jabberwocky and they head down to the dangerous and revolting insides of the Old City in order to seek such a weapon.

Wow…just wow…Just how in the world did I end up loving a book that had so many rape scenes and violence?  I guess the storytelling was so well written that I just ended up getting hooked to this book!   Christina Henry has done a brilliant job at creating a darker retelling of “Alice in Wonderland” in this book as she manages to make this book both terrifying and exciting at the same time!  I enjoyed the dark and twisted take on this tale as characters like the white rabbit, the Cheshire cat and the Caterpillar are much more villainous in this story than in their original formats as they are shown as actively trying to harm both Alice and Hatcher throughout their journey and are also engaged in enslaving most of the citizens in the Old City.
I also loved the way that Christina Henry made this story so frightening and intense as I was seriously disgusted at the many rape and sexual scenes in this story and yet I was happy that we have a strong female protagonist in Alice who would do anything to save the people of Old City from the antagonists’ grasps.  Now, I would like to talk about the characters themselves and the two characters that I automatically fell in love with were Alice and Hatcher!   I loved the way that Christina Henry portrayed Alice’s character as Alice goes through some great character development in this story as she started out as being a meek and traumatized character, but as the story goes on, she starts becoming a much stronger and independent character who tries to save the people of Old City and takes out evil with her handy little knife!  But probably the most interesting and awesome character in this story was none other than Hatcher himself!  I loved the fact that Hatcher was such a mysterious character as you wonder why he is connected to the Jabberwocky and (I know I am going to sound like a sadist here, but) I loved seeing the fight scenes between Hatcher and the various soldiers of Old City as it shows that he can easily take down anyone in his path!  But what I really loved about Hatcher’s character was his complete devotion to protecting Alice as is shows that despite him being a serial killer of sorts, he still has a good heart on his shoulders.

Alright, so this book has two major issues that is often problematic with many people and that is the topic of rape and strong graphic violence.  There are many rape scenes in this book and I usually have issues with rape in books and this book was no exception to my disgust towards this issue.  Also, the violence in this book is surprisingly much more graphic than any other fantasy and horror novel that I had ever read as there are many scenes where Alice and Hatcher have to slaughter some of the antagonists in order to reach their goal and the ways that Alice and Hatcher kill off their opponents are told in an extremely graphic and horrific detail.

Overall, “Alice” is truly one of the best dark and twisted retellings of a fairy tale that I have ever read and I will definitely be picking up the second book in the series “Red Queen!”