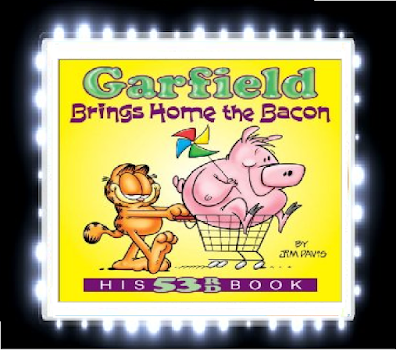 In this collection, Garfield continues to have fun adventures with his dorky owner Jon Arbuckle, his dim witted sidekick Odie and the sane Liz as his adventures go from having dreams about food falling from the sky to smacking spiders left and right!

Jim Davis’ writing: Jim Davis’ writing continues to be witty and hilarious to read through as I thoroughly enjoyed Garfield’s snarky comments about Jon’s dorky ways and Odie’s simple mindedness and I also loved the fact that Garfield and Liz seem to bond with each other due to both of them being snarky towards Jon’s odd lifestyle, although Liz is a bit more understanding of the two due to dating Jon.  I also enjoyed seeing Arlene, Garfield’s love interest, in this collection since it is rare that we see storylines that revolve around Arlene and I hope that the future “Garfield” comic book collections feature more of Arlene just so we can see another cat who can match wits with Garfield!

Jim Davis’ artwork:  Jim Davis’ artwork is as usual hilarious and creative to look at as all the characters are drawn in an exaggerated manner.  But the two characters that really stood out in this volume were Liz and Arlene themselves as they are drawn with huge lips and eyelashes that set them apart from the rest of the goofy cast!