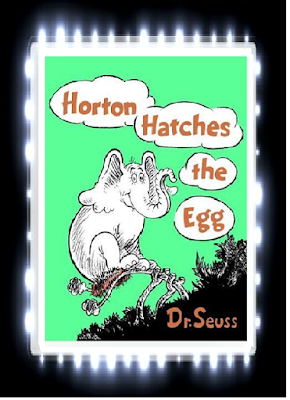 "Horton Hatches the Egg" is one of Dr. Seuss' most memorable classics as it stars everyone's favorite elephant, Horton!  This time, Horton has his hands full as he tries his best to take care of a lazy bird named Mayzie's egg while she goes off to take a vacation.  Unfortunately, hunters come in the jungle and they got Horton trapped!  Will Horton get out of this dangerous predicament and still protect Mayzie's egg?  Read the story to find out!

Dr. Seuss had done a great job at both illustrating and writing this book.  What was so unique about this book were the illustrations.  The main colors used for the images were blue, black, white and red, which makes the book extremely creative as few books use only three or four colors to color the images.  Horton the elephant always wore a smile on his face, despite his horrendous situation, making him a truly innocent and friendly animal.  A great trait that this book has shown is how loyal and determine Horton is as he was willing to take care of Mayzie's egg and he refused to let anyone tease him about taking care of the egg since he wanted to follow on his word that he will take good care of the egg.

The only problem this book has, in terms of if it is appropriate for children, is that Mayzie was being selfish around Horton and she refused to take responsibility for taking care of her egg at the expense of Horton.  But, don't worry, Mayzie's irresponsible actions are shown in a negative light and the story strongly encourages children to be more responsible and to not follow Mayzie's example of irresponsibility.

"Horton Hatches the Egg" is truly a memorable classic about the importance of being loyal and keeping your promise to people and this book will easily be an instant hit for children everywhere.  I would recommend this book to children ages four and up since there is nothing inappropriate in this book unless you count Mayzie's irresponsible behavior being unsuitable for children to learn from.