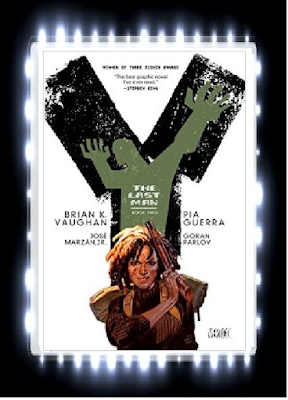 After reading the first book of Brian K. Vaughan’s classic graphic novel, “Y: The Last Man,” I just had to read more from this Eisner Award winning series!  So, I finally picked up the second book to “Y: The Last Man” and it was just as INTENSE, HEARTBREAKING AND EXCITING as the last volume!

Yorick Brown, along with his new allies, Agent 355 and Dr. Allison Mann, still embark on the journey to reach Dr. Mann’s lab in San Francisco so that way, Dr. Mann can provide a cure for the epidemic that broke out and killed all the males in the world.  Suddenly, the three allies are confronted by a Russian woman named Natalya Zamyatin who claims that there are still men in outer space and that they are on their way to Earth!  Unfortunately, the four new allies will also have to face against the Israeli troops who want to take Yorick in!

Brian K. Vaughan’s writing: Wow!  Brian K. Vaughan’s writing is just as stellar in this volume as it was in the last volume!  As I had mentioned before, I really enjoyed the set up that Brian K. Vaughan brought to this series as you have to wonder about what the world will be like without men.  In this volume, Brian K. Vaughan further develops the story as we are introduced to more obstacles that Yorick and his allies have to get through to get to San Francisco.  I loved the introduction of Natalya Zamyatin as she brings an interesting dynamic to the story as being the one who warns Agent 355 and Yorick about more men coming to Earth and I was on the edge of my seat trying to see what will become of the male astronauts and whether or not their arrival to Earth will change how everything in the story has been progressed so far.  It was also great seeing another tough heroine in the story as Natalya will soon surprise you in this volume!  I have been enjoying the intense storytelling that Brian K. Vaughan brings to this volume and I loved the way that Brian K. Vaughan had really developed the characters as we see a darker side to some of these characters that we never saw in the previous volume which made the stories even more interesting!

Just like the first volume, there is some strong language in this volume including the infamous “f” word and “s” word and anyone who does not like reading strong language might want to skim over these words.  Also, this volume has more gory violence than the last volume as there are more characters being killed in gruesome ways such as some characters being shot to death and blood is shown spurting everywhere.

Overall, “Y: The Last Man: The Deluxe Edition Book Two” is a truly brilliant follow-up to the first volume and anyone who is a huge fan of Brian K. Vaughan’s works or loves reading about post-apocalyptic worlds will definitely want to pick this series up!