[BOOK REVIEW] Goldilocks and the Three Dinosaurs by Mo Willems 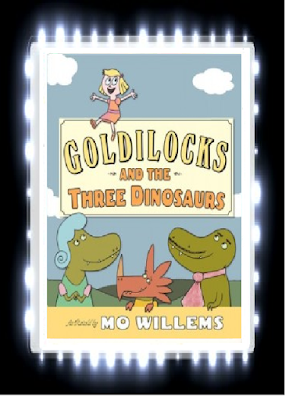 Title:  Goldilocks and the Three Dinosaurs

“Edwina the Dinosaur Who Didn’t Know She Was Extinct”

These are the books that I had read from the creative mind of Mo Willems and I will admit that I had enjoyed almost everything that Mo Willems has written over the years!  Well, I just read Mo Willems’ most recent children’s book and that is called “Goldilocks and the Three Dinosaurs” and it is definitely one story that every children and adult will enjoy for many years!

Once upon a time, there were three dinosaurs (a Papa Dinosaur, a Mama Dinosaur and some Dinosaur who was visiting from Norway) and one day (for no reason), they decided to make three bowls of chocolate pudding at varying temperatures and go…someplace else.  They were definitely NOT doing this to set up a trap for an unsupervised little girl who happens to come along to their house.  So, when Goldilocks approaches their house, she will be in for a big surprise!

Wow…just…wow!  I cannot believe I had never heard of this book (well, the fact that it was just recently made in 2012 had something to do with it), but now that I had finally checked this book out, I am just so amazed at how awesome this book turned out!  When I saw the title “Goldilocks and the Three Dinosaurs,” the first thought that came into my head was that we finally had a remake of a classic fairy tale since it has been awhile since I had read children’s books that were retellings of old fairy tales.  The second thought that came into my head was that the moment I read this title, I knew that this book was going to be something really creative and hilarious and I was right!  Mo Willems certainly knows how to create a story that is not only pleasing to children, but also pleasing to adults!  I loved the writing style of this book as the characters are hilarious and the narration is sarcastic and witty.  Probably my most favorite quote out of this entire book was stated by the narrator:

Who could resist chocolate pudding?  I know I cannot resist chocolate pudding!  I loved the idea about Mo Willems using three dinosaurs for this story instead of three bears since it really gave this book a more creative flair and I loved the fact that the baby dinosaur is actually a dinosaur who was visiting from Norway since it was a different twist to the original story.  I also loved the way that Mo Willems slightly alerted the readers about the three dinosaurs’ plans in trying to get Goldilocks to come to their house and yet used hilarious lines to avert the idea about the dinosaurs preparing to make a meal out of Goldilocks such as:

“The three Dinosaurs went Someplace Else and were definitely not hiding in the woods waiting for an unsuspecting kid to come by.”

Mo Willems’ illustrations are as usual hilarious to look at as the three dinosaurs look cartoony with their long snouts and small round eyes and I loved the fact that both the Mama and Papa dinosaur were green while the Norwegian dinosaur was red.  I also loved the illustrations of Goldilocks herself as she has short blond hair and large round eyes that makes her look so oblivious to anything happening around her.

Overall, “Goldilocks and the Three Dinosaurs” is a truly brilliant retelling of the classic fairy tale and children everywhere will definitely re-read this book over and over again for many years!