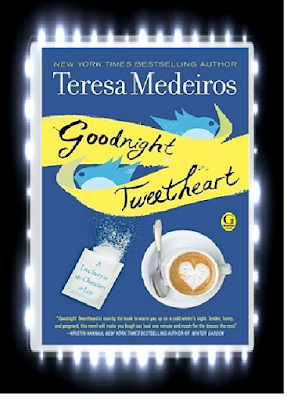 After some urging from my friends and seeing a brief look at this book from one of the last books I had read from Teresa Medeiros, I just had to check out Teresa Medeiros’ latest book “Goodnight Tweetheart” and I was amazed at the concept of this book!  “Goodnight Tweetheart” is definitely a great book for romance novel fans of the “Twitter” generation!

Abigail Donovan is a struggling writer who is trying to finish her latest book, but she could never find the right things to say in her new novel!  However, when her publicist decides to give Abigail her own Twitter account, Abigail is amused by this as she had never used Twitter before.  Afterwards, however, as Abigail begins to get the hang of having a Twitter account, she meets a strange man online named Mark Baynard who claims that he is an English professor on sabbatical and it was then that she and Mark began twittering away with each other!  However, when things get really personal between Mark and Abigail, Abigail will soon discover some secrets about Mark that might destroy her relationship with him forever!

Wow!  I never would have thought that Teresa Medeiros would write a romance novel that deals with internet love!  Teresa Medeiros has done a great job at writing this novel as it deals with the trials of internet love and also tries to set up a love story where Twitter is a huge central point of the plot! I really enjoyed the way that the writing is set up as a way you would chat with a person on Twitter and some of my favorite dialogues in this novel included:

MarkBaynard: Only when it comes to getting the restraining orders.

Abby_Donovan: Do you know how many people I’ve had to Block in the past two days?

Abby_Donovan: I’ve gotten dozens of dirty tweets, 4 marriage proposals & an exorcism chant from a voodoo priest who wants to drive out my sexual demons.”

I also really loved the characters in this novel, especially Abigail Donovan and Mark Baynard!  Abigail Donovan is a heroine that I truly can relate to as she is a struggling writer who is trying to finish her book except that her life has so many hardships including the death of her father and dealing with her mother’s mental illness.  I like seeing how Abigail can get really witty and funny whenever she is typing to Mark since it shows how hilarious and clever she truly is. Now, Mark Baynard was a hero that I truly felt sympathy for by the end of the book (I will not tell you about Mark’s character at the end of this novel, but you will definitely sympathize with his character!) and I loved the way that he chatted with Abigail as he is just as witty and hilarious as Abigail is and I found them to be a really cute couple!  I also loved the dialogues being shared between Abigail and Mark as they make some fun of the events going on currently in the world such as discussing about singers like Britney Spears and the Kardashians.

The reason why I gave this book a four star rating is because even though I thought it was really creative seeing this book being written in Twitter format, I am one of those readers who enjoy romance novels where characters are actually having a “physical” relationship with each other, rather than having a romance on the internet.  I guess I am not used to “internet love” type of books since I have been reading romance novels where characters are physically seeing each other for many years and this is a new subject for me to take in a romance novel.  Also, the book was a bit too short since I felt that the ending of this novel was a bit abrupt and I wanted to see more from Abigail and Mark.

Overall, “Goodnight Tweetheart” is a great romance novel for the current generation and anyone who loves Twitter and romance novels will definitely get into this book!